"Another Miracle on Christmas Lake" at Yellow Tree Theatre 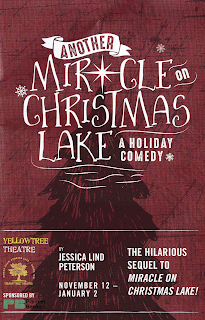 It almost took a miracle for me to see Yellow Tree Theatre's annual original holiday* comedy based in the fictional and very Minnesotan town of Christmas Lake. I arrived at the theater with a group of friends on a warm and rainy December night to find that the performance had been cancelled due to a tornado warming (in Minnesota in December?! and climate change isn't a thing). The next week everyone was busy with Christmas plans, so a subset of the group rescheduled to see one of the last performances this week. Amidst a slew of show closings on Broadway and locally, this show did indeed happen! A perfect final show of 2021, closing out a less than perfect year of theater, but one that saw growth, ingenuity, and a return to some form of normal (more on that in the coming days). There are only two performances left of Another Miracle on Christmas Lake, but you can still get yourself to Osseo to see it if you act quickly. Or make plans for their two upcoming shows in 2021 which are both brilliant and rare choices - the funny, feminist, historical, and modern play In the Next Room; Or, the Vibrator Play and the musical Passing Strange.

Yellow Tree produced Another Miracle on Christmas Lake in 2019, so in the interest of time I've borrowed much of my review from that production, with some new commentary on the two-thirds new cast.

The sequel of the original Miracle on Christmas Lake (both written by Yellow Tree co-founder Jessica Lind Peterson) returns us to the small Minnesota town of Christmas Lake, where Tess and Colin run the local community theater after moving back from NYC. Now with a baby, they're tasked with taking on the holiday pageant after the entire town comes down with the goat flu (which causes its victims to make strange bleating noises and eat garbage). But this isn't just any pageant, Christmas Lake is in danger of being annexed by the neighboring town Potterton unless they can come up with the funds to keep their town functioning independently. A successful pageant would impress a Hollywood location scout who's looking to film a remake of It's a Wonderful Life in small town Minnesota, starring Minnesotans Josh Hartnett and Jessica Biel. With most of the town sick, they have to rely on our favorite nerdy couple Neil and Martha, and a new character named Gunther, who we soon learn is Neil's rival for Martha's affections. The plot is all a bit convoluted, but it's really just an excuse for silly humor, Minnesota references, and showcasing this ridiculously talented cast.

The "goat flu" plot (written ten years ago) rings eerily true in the middle of this ongoing pandemic, with real-life theaters struggling for the show to go one amidst breakthrough cases, exposures, and quarantines. But in the fictional world of Christmas Lake, the show does go on, thanks to the creativity and ingenuity of the artists (not unlike the real world).
Charles Fraser seamlessly takes the helm as director of this year's show, continuing the tone of absurdity mixed with sentimentality. Antonio Duke and Sarah Dickson ably take over as the new Colin and Tess, the mostly normal couple at the heart of the piece. Lisa Vogel is adorably hilarious as our beloved Martha, and Michael Quadrozzi is just the right amount of ridiculous as the Hollywood scout. Jason Ballweber returns from the 2019 production as Gunther, once again milking every line, every look, every toot of the... horn, to great comedic effect. Last but not least, Ryan Nelson simply IS Neil, after playing this character since its inception. He's a natural with Neil's never-ending obsession with Little House (new this year: a WWCD t-shirt - "What Would Charles Do"), his frequent so-bad-they're-good impressions, and his adorkable love story with Martha.

Yellow Tree's little stage looks as warm and cozy as it ever has, with the rustic and homey barn theater set (once again designed by Katie Phillips), strung with varied colorful Christmas lights that blink in time to the music (lighting design by Tony Stoeri). Costumes range from casual chic (Colin and Tess) to nerdy Minnesotan to pageant costumes with a charming DIY feel (designed Samantha Fromm Haddow). And of course, a visit to Christmas Lake is not complete without a Blake Thomas original song, the sweet, silly, and poignant "A Little Bit of Lovin' and a Christmas Tree."

Click here for information on this show and the remainder of Yellow Tree Theatre's 14th season.

*You can read about all of the holiday shows I've seen here, a few of which are still playing.