NYC Theater Trip 2021: "To Kill A Mockingbird" at the Shubert Theatre 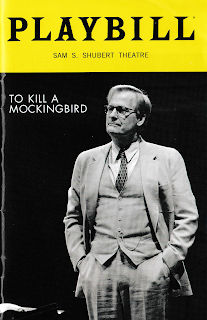 Show*: 3Title: To Kill a Mockingbird

Written By: Aaron Sorkin (adapted from the novel by Harper Lee)
Summary: A new adaptation of the American classic.
Highlights: To Kill a Mockingbird is an American tragedy. A tragedy that happened in 1934 when this specific story of a black man wrongly convicted and killed is set, a tragedy that was happening when the novel was published in 1960 at the beginning of the Civil Rights movement, a tragedy that is still happening today. I first saw this production in 2019, but after the racial reckoning that occurred after the murder of George Floyd, it feels even more urgent and necessary. This play feels like a call to action. There was no other possible ending to this story of a black man accused of raping a white woman in 1934 Alabama; no matter the evidence, no matter how good of a lawyer Atticus Finch is, there's no way a jury of 12 white men would do anything other than find Tom Robinson guilty (this is only a spoiler for people who don't know American history). But as Atticus says in his closing argument, "we can't go on like this, we must heal this wound or we'll never stop bleeding."
No one better to write this call to action than my favorite TV writer Aaron Sorkin, creator of such righteously idealistic TV shows as The West Wing and The Newsroom, bringing his trademark wit and intelligence to the script. He's created a clever narrative structure in which the story is narrated by Atticus' children Scout and Jem and their friend Dill, charmingly portrayed by adult actors Celia Keenan-Bolger (original cast member who won a Tony for this role, and returned to the show post-pandemic), Hunter Parrish, and Noah Robbins. The story begins after the trial is over, then we see the trial proceed, with flashbacks to fill in the story. The play culminates at the end of the trial, no justice for Tom Robinson (portrayed by Michael Braugher with quiet dignity), and some sort of unsatisfying justice for accuser Bob Ewell (a scary good Neal Huff). Sorkin reunites with his Newsroom star Jeff Daniels (also an original cast member returning to the show post-pandemic), who gives a beautifully quiet and nuanced performance as the iconic character Atticus Finch, whose inherent sense of justice is not enough to change the way the world was, or is. The Finches' long-time family maid Calpurnia (Portia) also gets to have her say, a nice update for 2019 (with even more updates for 2021). I won't even mention the ingenuous set that smoothly transitions from courtroom to front porch to inside the Finch home, or the gorgeous period costumes.
This is an old story that still needs to be told over and over, until we learn a new and better way to do things. All rise!
*Once again, I'm using an abbreviated Fringe-style summary for my NYC 2021 trip, since I am in the greatest city in the world with much more exciting things to do than write! Click here to see all of my Broadway-related blog posts.