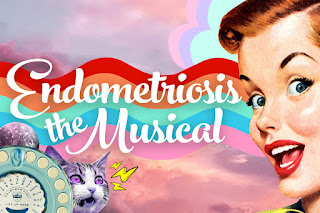 By: Ripped Nylons Productions
Written by: Maria Bartholdi (book and lyrics) and Kristin Stowell (music and lyrics)
Location: Theatre in the Round

Summary: A musical about one woman's struggles to be heard by her health care providers, and eventual diagnosis of endometriosis.

Highlights: It's only day two, but I can already tell you this is going to be one of my favorite shows of the festival. Firstly, it's a great and unique topic for a musical - who else is singing about women's reproductive health?! But we should be! Years in development, it couldn't be more timely with recent legal changes that have set women's reproductive health and rights back 50 years. And on top of that it's beautifully and cleverly written, both hilarious and poignant, and utterly relatable for any human who has ever menstruated. Songs cover the pain and shame around the menstrual cycle (why can't we say period at the dinner table, or on stage?!), constant doctors visits at which our protagonist is told her debilitating pain is normal or is all in her head, doctors prescribing birth control for any and all ailments in females from a very young age, and the novel idea that our reproductive organs and our reproductive choices shouldn't hold us back from doing everything we want to do. I hope and suspect that this is only the beginning for Endometriosis: The Musical. I'm not saying it'll end up on Broadway and win a Tony for best score like another female-centric musical that started at a Fringe festival, but I think it needs to be seen by more people than just five (likely sold out) Fringe performances. I would love to see it expanded to a 70-90 show (the happy ending wrapped up a little too quickly, I think there's more to explore there), and if they recorded a cast album of this fabulous score I would buy it, listen to it in my car, and sing along with every word. And they should lock this cast down because they're perfection. The two guys in the show (Christian Unser and Drew Tennenbaum) are great and very funny playing multiple (often antagonistic) characters, but this show belongs to the women. Abby Holstrom, who plays our protagonist Jane, appears to be new to #TCTheater and I look forward to seeing her again. Her portrayal is so empathetic and real, she really grounds the show in humanity amongst the wackiness going on around her, and has a voice that's so crystal clear and full of emotion I found myself tearing up in some of the more poignant moments. She's supported by a comedy/vocal dream team of a trio in Nora Sonneborn, Tara Borman, and Aly O'Keefe playing multiple characters and singing gorgeous harmony (particularly in the song "Birth Control" which you can watch here).
This mini-review is already too long and I haven't even mentioned the adorable DIY costumes and props, the smart and interesting staging/choreography in the in-the-round space (by choreographer Krista Grover Winkka and director Maria Bartholdi, who also voices some very funny and bizarre interstitial bits about a serial stabber), the fabulous three-piece live on-stage band (with music director/composer Kristin Stowell on keyboard), the perfect sound mix (TRP is a such great space for musicals, no mikes necessary), and the way they expertly walk the line between outrageous comedy and tender moments about this very real and relatable issue. You'll just have to see it for yourself, and I recommend making reservations because their first night was nearly sold out. Friends, this is going to be the breakout hit of the 2022 Minnesota Fringe Festival, and deservedly so.
The first step in recording a cast album - the song "Hide."

Hide.mp4 from Maria Bartholdi on Vimeo.