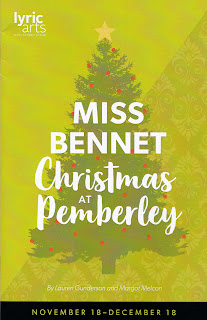 This holiday* #TCTheater season, we are blessed with not one but two productions of Lauren Gunderson and Margot Melcon's Pride and Prejudice fan fiction series Christmas at Pemberley. The first play in the trilogy, Miss Bennet, was first seen on local stages at the Jungle Theater five years ago, after which they co-commissioned two more plays, the latest of which, Georgiana and Kitty, is currently premiering at the Jungle. But you can also see where the story all began in Miss Bennet in a new production at Lyric Arts in Anoka. All of these plays are gems, perfectly marrying Jane Austen's legacy of female-centered stories in a man's world of property, marriage, and inheritance with modern feminist sensibilities. It's lovely to see a different take on these stories at Lyric Arts, but just as charming, funny, and heart-warming. You can visit Pemberley via Anoka Thursdays through Sundays until December 18.

Miss Bennet takes place a few years after Pride and Prejudice ended, leaving eldest sisters Jane and Elizabeth happily married to the Misters Bingley and Darcy, respectively, and younger sister Lydia not so happily married to the scoundrel Wickham (see program for helpful family tree). Kitty, the youngest sister, is in London and absent from the play, leaving bookish middle sister Mary as the heroine of this story. And what a heroine she is. She has grown from the comedic foil of P and P, a girl with her nose always in a book and playing music badly, to a smart, curious, talented woman who knows who she is and what she wants in life, even if that doesn't fit with society's (and her family's) expectations.**

The play takes place over a few days, with the sisters happily reuniting at the Darcys' home, Pemberley, for Christmas. They haven't seen each other in some time, so there is a bit of getting reacquainted. Mary at first feels "invisible" next to the closeness of her elder sisters' bond, but they soon recognize her growth and her worth, and include her in their circle of sisterhood. Even Lydia, as awful as always in her silly, flirtatious ways, has a deeper side that she's hiding, and eventually joins the happy sisterhood. The drama comes in the form of one Lord Arthur de Bourgh, heir to Darcy's recently deceased Aunt Katherine, who comes to Pemberley on route to the estate he has just inherited. It turns out that he loves books and facts and pragmatism as much as our dear Mary, and the two seem perfectly suited for a happy life together. But like any good Jane Austen story, there are a few obstacles in the way of happily ever after, which just makes the getting there that much sweeter.**Elena Giannetti directs this talented young cast, and achieves the right blend of humor, lightness, drama, and romance. Elizabeth Efteland and Scott Laban could not be cuter as Mary and Arthur; smart and strong characters that may be lacking in social graces but make up for it in earnest emotion. Gillian Constable and Maureen O'Malley are warm and sisterly as the happily married Jane and Elizabeth, Siri Wright is adorably annoying as Lydia, Noah Hynick and Ben Qualley are charming as the Misters Bingley and Darcy, and Katrina Stelk is a hoot as the foil to the Mary/Arthur romance.

The grand estate of Pemberley is well represented on Lyric Arts' stage. Massive windows with luscious red curtains line the back of the stage, with snow gently falling outside (although it always appears to be night outside; it would be nice to see the changing of the light to signify the passage of days). Two large columns, one the full column and the other just a suggestion, separate the libraray from the drawing rooms, both of which are full of period furniture in various arrangements. We see the piano, which Mary plays occasionally, on one side of the room and a tall library shelf full of books on the other. The lovely period costumes include empire waist dresses for the women, over which a shawl, or a jacket, or an overdress is worn to provide different looks, and suits with various ties, waist coats, and jackets for the men. (Costume design by Samantha Fromm Haddow, scenic design by Greg Vanselow.)

The more Christmas at Pemberley plays the better, and it's such a treat to be able to see two of the three in #TCTheater this year. I recommend seeing both to get the full dose of Jane Austen goodness, starting with Miss Bennet at Lyric Arts and continuing with Georgiana and Kitty (with all five-plus-one sisters reunited) at the Jungle. Each one is lovely and stands alone, but they're also a nice complement to each other and give a better fuller story of the Bennet sisters.

**Plot summary borrowed from my review of the Jungle's production.