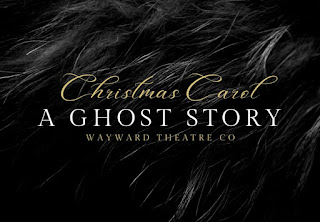 For an alternative (or complement) to the Guthrie Theater's annual production of A Christmas Carol, head across the river and see what the creative minds at Wayward Theatre Company are bringing to this classic story. Not only are they focusing on the ghostly aspects of the story and doing it in the gorgeous (and slightly spooky on a good day) James J. Hill House, but they're also performing in ten different locations around the house with three staggered groups of 30-person audiences walking around to the different locations. I always enjoy ambulatory site-specific theater, and this Christmas Carol: A Ghost Story is intricately planned, well executed, and provides an immersive (but not interactive) experience into this familiar and beloved tale of redemption. With three performance times every Wednesday through Sunday (except for Christmas Eve and Day) through New Year's Day, you have plenty of opportunities to follow Scrooge on his journey. But with only 30 tickets per show, and some performances already selling out, don't wait too long to secure your ticket.
First: some logistics. Masks are required for this performance because of the close proximity of actors to audience and lack of up-to-date ventilation systems in the historic home. Street parking can be found on Summit Avenue and surrounding streets, but you may want to arrive a bit early to find a spot (and even visit one of the nearby restaurants). And watch out for those St. Paul snow emergencies, of which I have been a victim in the past. Doors open promptly 15 minutes prior to showtime, and in a sneaky/smart move, after check-in you wait in the gift shop which is full of classic ornaments, vintage-inspired jewelry, fascinating books on Minnesota history, and other charming gifts (in other words, bring your wallet and check some things off your gift list). There is a coat rack, so you don't have to lug your winter coat all around the house (and most areas are plenty warm). Most performance locations have seating for everyone; a few also require some standing. You will be going up and down stairs to all four floors, with limited space available on the "lift" for those who need it. Finally, be on alert for startling noises or creatures jumping out of the shadows as you make your way through.
Wayward co-founder Sarah Nargang has adapted the story, keeping in all of the necessary elements and
simplifying some things into a 90-minute story (including transit time between scenes), and directs the piece with a slightly spooky bent, but also with attention to the emotions of the piece. The structure of the show is an admirable feat of logistics for everyone involved. With showtimes at 7, 7:30, and 8, there are overlapping groups of people wandering around and multiple scenes happening at the same time. I was in the first group, and never saw the other groups, and only on one or two occasions heard some ambient noise from another scene. Scrooge, Cratchit, and Fred are triple-cast, so that each audience group has one set of these characters, but all other characters perform their scenes three times a night, and with a different Scrooge/Cratchit/Fred set.
I followed Edwin Strout as Ebenezer around the Hill House (also played by Lolly Foy and Leif Jurgensen), a wonderfully stern and grouchy Scrooge, then terrified, then gleeful after his encounter with the four ghosts. Joshua McCauley plays his Cratchit (alternately played by Lucas Gerstner and Luke Aaron Davidson), appropriately befuddled and amiable. Completing the trio for my performance is Felipe F. Escudero as Scrooge's charming nephew Fred (also played by Grant Henderson and Michael Quadrozzi). Scrooge is in every scene and the other two show up a couple of times along the way, as we progress from Scrooge and Marley's in the first floor library, to Scrooge's bedroom on the 3rd floor for the first ghostly appearances (Raúl Arámbula's terrifying Marley and Daniel Vopava's elegantly creepy Christmas Present), back to the first floor for the Fezziwig scene in the festively decorate organ room, to the grand dining room to meet the Ghost of Christmas Present (a warm and animated Kymani Kahlil), then downstairs to the basement where the Cratchits are having a modest meal in the kitchen, more spooky basement stuff, and ending on the grand staircase for Scrooge's transformation, which somehow feels all the more sweet after literally journeying with him for 90 minutes.
Somehow, in this old house, they set up some very effective sound and lighting effects - thunder and lighting, spooky noises, flickering fireplaces, dark and creepy lighting (perhaps a bit too dark in the transitions, particularly the stairways). Maybe it was just the mood lighting, but the costumes look lush and gorgeous. From the Ghost of Christmas Past's Cruella de Vil-esque costume of furs and veils, to the Ghost of Christmas Present's amazing headdress with antlers, feathers, and leaves, to the beautiful period costumes at the Fezziwig ball. They added to the perfect set design that is the James J. Hill House with some props and other set pieces like gravestones. And there's music too - some bits between scenes or heard "off stage," plus an oddly appropriate rendition of "Time in a Bottle" at the Fezziwig's dance, with some charming Victorian dancing. (Technical Direction and Set Design by Justin Hooper, Costume Design by Rhiannon Fiskradatz, Music Direction by Steve Herzog, Choreography by Kymani KhalilLight Designer by Jake Otto, and Sound Designer by Pete Kivdera)
There are a ton of holiday* offerings in #TCTheater this (and every) year, but Christmas Carol: A Ghost Story stands apart as the only one that lets you walk around a gorgeous historic mansion, fully decorated for the holidays, with characters from perhaps the most beloved Christmas story in English literature, providing an immersive and intimate experience. And it's likely also the only one in which things may suddenly emerge from the shadows and make you jump, like the best Halloween/Christmas mash-up.
*Click here for reviews of all of the holiday shows I've seen this year.