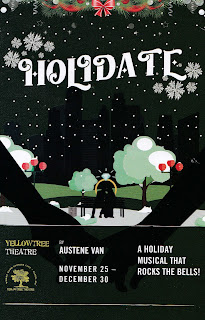 Yellow Tree Theatre is doing something a little different this holiday* season. From the beginning, Yellow Tree has produced an original holiday Minnesota comedy written by co-founder Jessica Peterson, both in the popular Miracle on Christmas Lake series and other stand-alone plays. Taking a break from that this year, they're producing another original holiday show, this one written by new Artistic Director Austene Van for Park Square Theatre in 2011. There may be fewer Minnesota references and goofy characters, but it's still a festive, fun, and heart-warming show. Plus, there's music, lots of great music! So make yourself a Holidate with Yellow Tree Theatre in charming downtown Osseo this year (continuing through December 30).
A simple story of a couple shopping for Christmas presents is the framework upon which is hung a delicious array of Christmas songs and other classics. Taylor and Michael have nearly completed their shopping, loaded down with bags and packages, when they discover they can't find their car keys. Michael calls his sisters Thomasina and Jamecia (a clever nod to #TCTheater artists Petrus and Bennett, the former a part of the original production, the latter currently performing as Mrs. Potts at the Ordway). While they wait for "Mecie" to arrive, they talk about all sorts of things, including their plans to spend their first Christmas together, the only trouble is - with whose family? The other bit of tension is that Taylor is hoping that Michael will propose after three years of dating (here's an idea: ask him, or have a conversation about it, instead of moping around and giving him all the power to ask or not). Throughout the discussion, they sing songs to each other, or with each other, or alone while the other one wanders off. But of course, like a good Hallmark movie, Taylor and Michael get their happy ending just before their ride shows up.
Marci Lucht, herself a veteran of the Christmas Lake franchise, directs the show with lightness and charm, and a few moments of deeper emotion. Yellow Tree's smartest choice in creating this production was hiring two of the best singers in town - Jennifer Grimm and Julius Collins. Both have amazingly gorgeous and versatile voices, and together they're a dream. My only disappointment is that they're miked and accompanied by a recorded track, including some backup vocals. For such a sweet, simple, intimate story like this, in this small space, I would have loved for there to be a live musician or too, with the performers unmiked. I know for a fact that both of them have voices powerful enough to easily fill up that room. But they cover the recorded music cleverly by having Jason Ballweber, as a street musician the couple encounters, pretend to play music or hold up a boombox, as if he were providing the accompaniment. The other thing he provides is that familiar humor and silliness we're used to in a Yellow Tree holiday show (in which he has also performed a time or two).
The charming set (designed by Justin Hooper) includes a backdrop of a sparkling cityscape on a snowy night, and a multi-level gazebo, like one you might find in a city park or shopping district. And the lighting (designed by Tony Stoeri) provides a cozy winter feel. The cast is dressed in stylish winter wear, except for the street performer, who is wearing the gaudiest Christmas sweater and scarf imaginable (costume design by Edward Summers).
At about 80 minutes, Holidate is a short and sweet option this busy #TCTheater holiday season, with a simple and charming story, and fantastic musical performances. The show continue Wednesdays through Sundays until December 30 (click here for info and tickets).
*Click here for reviews of all of the holiday shows I've seen this year.