"The Little Prince" at the Guthrie Theater 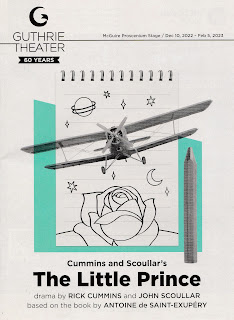 The 40+ year tradition A Christmas Carol is not the only magic the Guthrie Theater is weaving this month. Across the lobby in the proscenium theater, the new production of the classic children's book The Little Prince is full of theater magic and sheer delight, no matter your age. Despite the fact that this book is, according to Wikipedia, the most translated book next to the Bible, I have never read it, or seen any previous adaptation on film or stage. I can't think of a better introduction to this magical story of loneliness, connection, and exploration than through this truly inventive production. While A Christmas Carol closes soon, The Little Prince continues into the new year, providing an oasis of color and imagination in the darkness of winter (continuing through Feb. 5).
Written by French aviator and writer Antoine de Saint-Exupéry, the story of The Little Prince is told by an aviator who crashes his plane in the desert (which the author also did). He's all alone without food or water, until the little prince arrives, and tells him about his adventures. He comes from a tiny planet, with no other people, just three volcanoes and a humanoid flower. After leaving his planet, he stopped at several other planets and met strange people, before landing on earth. The aviator and the prince soon run out of food and water, and need to find a way home.
Featuring work by three members of The Moving Company (and formerly of the renowned Theatre de la Jeune Lune), this is a very MoCo show. By which I mean imaginative, unexpected, thoughtful, creative, a little odd, and entirely magical. There are many moments of theater magic, with objects (or people) appearing seemingly out of nowhere. While A Christmas Carol employs huge set pieces and technical feats, The Little Prince is all old fashioned theater tricks and illusions that fill the audience with wonder.
MoCo co-Artistic Director Dominique Serrand directs the piece (an adaptation written in 2000) and infuses it with that MoCo magic, flowing gracefully from scene to scene, planet to planet, memory to present. Just a five-person ensemble creates this world, with the help of  five stagehands (who take a bow at the curtain call) helping to accomplish the magic. MoCo's other co-Artistic Director Steven Epp portrays the aviator and is a wonderful narrator guiding us through the story, somehow both a grown-up and a child at the same time. Reed Northrup is a delight as the childlike prince, so open and curious. The third MoCo member, Producing Artistic Director Nathan Keepers, plays three very different characters with very different physicalities, a silly king, a fox, and a snake. Also playing multiple characters are Wariboko Semenitari as a hilariously conceited man and a weary lamplighter, Catherine Young as the charming and petulant rose, as well as a large man and a small man.
The program describes the set as a studio or "giant toy box," but to me it feels more like a spacious warehouse in which these stories come to life. Set pieces include a cool vintage desk with rotating stools, boxes and crates, tarps covering objects to reveal them later, a curtain that looks like parachute, and a set of tall shelves upon which the actors sometimes perch.
The costume design ranges from a traditional aviator wardrobe, to the prince's ethereal and gauzy tunic, to the gorgeous and surprising rose dress, to the costume/puppet hybrids including the aforementioned large and small man, and the snake, with a large body and tail manipulated by multiple actor/puppeteers. Lighting and sound complete the effect, from the light of a sunset, to music that seems to come out of a small old-fashioned radio on stage (from my front row seat I could see that the actors were miked, but I didn't notice any amplification, so they were used sparingly). (Scenic design by Rachel Hauck, costume and puppet design by Olivera Gajic, lighting design by Yi Zhao, sound design and composition by Sinan Refik Zafar.)
You can see The Little Prince, an hour and forty minutes of wonder and delight, through February 5 at the Guthrie Theater.