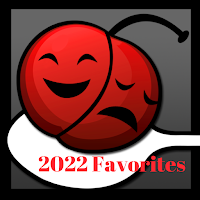 2019 was a fantastic year of theater, during which I saw over 200 shows. Then came 2020, and a global pandemic that shut down theater for much of that year and into the next. With increasing vaccinations and decreasing infection rates, theater came back in the fall of 2021, but not without cancelled performances and entire productions due to new variants and higher infection rates in the winter months. It hasn't been an easy road, with the COVID requirements put in place by Actors Equity (union) for the safety of artists and patrons, a significant decrease in theater attendance, and financial instability that caused at least two local theaters to suspend all performances. But if there's one thing we've learned the past few years, it's that artists will find a way to make art. I couldn't be happier that in 2022 I finally experienced a full year of theater again, with some really amazing and creative work by our intrepid local theaters. From the Broadway tour of Come From Away in January (during which they flew in cast members from across US and Canada to keep the show up and running in the high Omicron days), to my second viewing of Theater Latte Da's new holiday classic Christmas at the Local on New Year's Eve, I saw about 140 theater performances in Minnesota (not counting a few out of state theater trips and 23 Minnesota Fringe shows in 7 whirlwind days), which is a pretty great bounce-back from the last two years, if not quite up to pre-pan levels. And now I have the difficult task of narrowing down the amazing shows I saw this year to a small list of favorites. Here are my 10 (or so) favorite musicals, plays, new work, and more.
Musicals (in alphabetical order, click the title to read the full review)
Plays (in alphabetical order, click the title to read the full review)
New Work (in alphabetical order, click the title to read the full review)
Outdoor / Site-Specific (in alphabetical order, click the title to read the full review)
My favorite new #TCTheater company this year is The Birth Play Project. Their new original play Mary’s Wondrous Body performed to small audiences in Elision Playhouse's lobby space for a few weekends in December so it might have flew under your radar. But take note. Based on a true historical story of a woman who claimed to give birth to rabbits, but speaking to very modern issues of women's reproductive health and the dangers of childbirth, this was a thoughtfully executed play with original music that made me excited to see more.
2022 was a great year for festivals, returning and new faves. Minnesota Fringe had their first fully in-person festival in three years, and even more than the amazing shows I saw (my favorite of the 23: Endometriosis the Musical, which I truly believe has much more life in it - stay tuned), was the return of that wonderful feeling of community in the Cedar-Riverside neighborhood, surrounded by people who are all there for the same reason - theater. I also saw a few great shows at Twin Cities Horror Festival, a fantastic festival (even for people like me who aren't into horror). And I returned to the best little music festival in Minnesota - Storyhill Fest in Deerwood, for two days of great music in the great outdoors (tickets on sale for August 2023!).
I also traveled to two Shakespeare (plus) festivals, which is a great way to see a bunch of theater away from the distractions of normal life. Great River Shakespeare Festival returned to outdoor shows for the first time in three years, offering three shows including a super fun and colorful Twelfth Night, Carlyle Brown's epic historical play The African Company Presents Richard III, and my favorite show of the weekend, Always... Patsy Cline. On the invitation from my friends at Minnesota Theater Festival, I also made my first visit to American Players Theatre in the middle of nowhere, Wisconsin. I was completely blown away by this absolutely magical experience. With 8 shows performed in rep on two stages over their 4-month season, an incredible company of actors (including some familiar faces from #TCTheater), gorgeous design, and a setting that calls to mind Middle Earth, APT is a must-do experience for any Midwest theater lover. I look forward to returning to both of these "theater camps" in 2023.
And that concludes my year-end wrap-up. A year not without its challenges, but a year of great art produced by the #TCTheater community and elsewhere (I also saw five wonderful shows on Broadway this spring). I look forward to an even better 2023! See you at the theater.