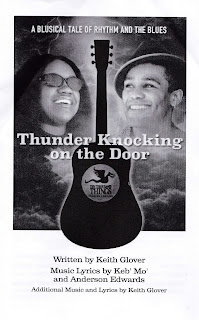 When I returned home from two weeks in paradise (aka New Zealand) on March 11, 2020, one of the shows I had on my schedule to see that weekend was Ten Thousand Things' production of Thunder Knocking on the Door. That didn't happen, for reasons we are all too familiar with. But now, more than two years later, I was finally able to see it. While they're still unable to tour like they usually do (to prisons, community centers, homeless shelters, and other locations were people don't usually have access to theater), Ten Thousand Things is performing the show at Capri Theater and Plymouth Congregational Church, with pay-what-you-can tickets, and have even recorded a cast album (that never happens in regional theater!). No one does theater like Ten Thousand Things, so accessible, raw, up-close-and-personal, with "All the Lights On," but with the highest quality of performance. This show is a rollicking, feel-good, fairy tale of a "bluesical" that was worth the two-year wait (trite but true). Catch in North or South Minneapolis through May 8 (click here for info, tickets, and to purchase the cast album).
This fantastical yet grounded story of guitar "cutting contests" takes place sometime in the past, somewhere "between two deltas." In the prologue to the main story, Jaguar Sr. wins one such contest against a mysterious man, his wife Good Sister about to give birth to twins. Flash forward to twins Jaguar Jr. and Glory all grown up, having inherited a special pair of guitars from their deceased father. After a couple of other dead husbands, Glory is now partnered with Jaguar Sr.'s twin brother Dregster. A mysterious man named Thunder comes knocking on the door, looking for a place to stay. It turns out he's the guitar player to whom Junior lost his guitar, and now he's come to challenge Glory to win the other one. But Thunder is not just some talented musician, he may be the devil, or a shape-shifter, or some other kind of supernatural being. He restores Glory's sight (did I mention she was blinded in a car accident after a bad break-up?), vowing to take it away again if she loses. But if he loses, he'll turn to stone, and to add further complication, the two have fallen in love.
With book by Keith Glover and music and lyrics by Grammy winning blues musician Keb' Mo' and Anderson Edwards, Thunder Knocking on the Door premiered Off-Broadway 20 years ago. It's a great choice for TTT with its small cast and fairy tale storytelling style. Marcela Lorca directs the top-notch five-person cast with playfulness and humor, but a grounded sense of family. It really doesn't get much better than #TCTheater favorites T. Mychael Rambo and Thomasina Petrus as the elder twins and Good Sister, respectively. T. Mychael differentiates the two characters in ways that go beyond a mere wardrobe change, Thomasina radiates warmth and toughness as the younger twins' mother, and the two are a charming couple. Rajané Katurah has been seen on multiple stages around town the last few years and deservedly so, it's a thrill to witness her incredible vocal talent up close, and watch Glory's growth and transformation. Brian Bose brings all the energy and physicality of his dancer background to the role of Junior, a joy to watch. And #TCTheater newcomer Ronnie Allen is a real charmer as Thunder, walking the thin line between devious trickster and earnest open-hearted human.
While they're not taking this production to non-traditional spaces like prison cafeterias, they've kept their signature style of performing in a small square space within a couple rows of chairs, with literally "All the Lights On." Set pieces (designed by Seitu Ken Jones) are simple but effective, just a couple of crates painted sky blue and chairs covered in tie-dyed blue tarps. Characters are dressed in sharp period clothing, with Glory experiencing a fun transformation from housedress and chenille robe to a couple of gorgeous wrap dresses (costume design by Sarah Bahr). And perhaps because they're not touring, or perhaps because this electric music requires it, they were able to get a little more fancy with the sound, with performers and instruments miked, projected through speakers around the room. Music director and local music legend Sanford Moore accompanies the cast on keyboard, with Deevo providing all of the many fierce guitar licks. The music is absolutely fantastic, and it's a rare treat indeed to be able to buy a recording and listen to it repeatedly.
The joyful, foot-tapping, heart-warming Thunder Knocking on the Door continues through May 8 at Capri Theater in North Minneapolis and Plymouth Congregational Church in South Minneapolis.