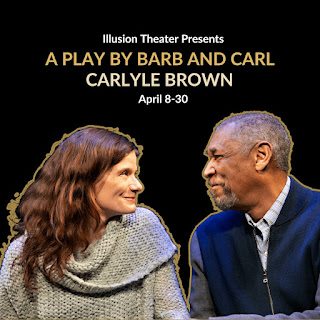 Illusion Theater is returning to live performances and christening their new space with a new play by Carlyle Brown, Playwrights' Center Core Writer and playwright in residence with Illusion. You've likely seen a play or three by this prolific local playwright at any number of theaters around town, but I venture to say that A Play by Barb and Carl is his most personal. In it, he and his wife and dramaturg Barbara Rose Brown tell the story of their marriage, and how it was affected by Barb's stroke which left her unable to speak. It's an incredibly moving and poignant story, well and succinctly told in just 70 minutes, with raw and real performances by the cast. You can see it at the newly expanded Center for Performing Arts in South Minneapolis through the end of the month (click here for info and tickets).

A Play by Barb and Carl has been in development at Illusion through their Fresh Ink series for several years. I'll let them set the scene: "In March of 2017, nationally acclaimed playwright Carlyle Brown’s wife and dramaturg Barbara Joyce Rose-Brown had a stroke which left her with right side weakness and an inability to speak. A dramaturg had lost her access to language. A playwright had lost his dramaturg. As a way of working through their situation, as they had so often before, they decided to write a play. This is that play."

A Play tells Barb and Carl's story, from the onset of her symptoms, through the terrifying stroke, and into her slow recovery. But more than these facts, this play beautifully conveys the emotions of the story. This is done partly through soliloquys delivered by each of the three characters directly to the audience, which gives the audience greater insight into their experience. This is particularly effective when coming from the character of Barb, who cannot speak more than one or two comprehensible words (her favorite: no). But the soliloquys give her a voice, rather than letting the other characters speak for her (in fact she has a soliloquy about that very topic).
In addition to the writing of this well-constructed play, the emotions of the story are conveyed through the excellent performances by this three-person cast, in particular Kimberly Richardson as Barb. Kimberly is an incredibly talented physical actor, one with a rubber face and body that can convey so much with nary a spoken word. She's mostly used this skill for comedic effect (frequently with Ten Thousand Things or Open Eye Theatre), but here she applies them for dramatic and emotional effect. Through her performance, she deftly conveys the physical limitations of Barb, cradling her useless right arm and struggling to walk with a cane, as well as the rich emotional and mental life inside that's struggling to get out. It's a truly remarkable performance that portrays all the complexities of this character and this disease.
JoeNathan Thomas is also wonderful as Carl, warm and tender, yet exploding in bursts of frustration. The addition of a third character, a nameless Healthcare Worker skillfully played by Laura Esping, adds much to the story not just by showing how essential healthcare workers are when we need them, but also by providing a sounding board or advice-giver for the other characters. All three actors are on stage for most of the show, sometimes standing off to the side watching, sometimes facing away, but always present.

After many years in their space on the 8th floor in the Hennepin Center for the Arts in downtown Minneapolis, Illusion has moved to the Center for Performing Arts, which recently added new and modern construction to their historic building, making it a mix of old and new with many artists in residence. Illusion's theater space is in the new part, a black box theater which for this performance is set up as a mini-thrust. It's a more intimate space than their old one, which sometimes felt too big for the work they were doing. The design for this play is simple but effective, a mostly bare stage against a backdrop illustration of neurons, with lighting cues to differentiate scenes and punctuate moments (scenic design by Dean Holzman, lighting design by Alex Clark).

Carlyle Brown wrote and directed the play, with Barbara Rose Brown once again serving as his dramaturg. I can't begin to imagine how difficult, cathartic, and healing this process must have been. But that's what artists do when faced with a crisis - they make art. The result is a truly beautiful play about love, marriage, art, language, and perseverance. In the face of a medical incident which changes everything, is love enough?