"imagine a u.s. without racism" at Mixed Blood Theatre Company 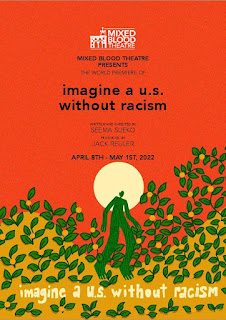 Mixed Blood Theatre Company returns to indoor performance in their Minneapolis firehouse home for the final show under the leadership of founder Jack Reuler - the necessary new play imagine a u.s. without racism. What a thing to imagine, indeed, and what a perfect time to imagine it - coming out of a global pandemic and racial reckoning, a time when we're reassessing how we do everything and looking for ways to do it better. Playwright and director Seema Sueko interviewed 100 people across the U.S. with the simple and complex prompt "imagine a u.s. without racism," and has woven the responses into an 80-minute play that's both a cohesive and engaging story about this diverse group of characters, and a call to action to "create a just neighborhood."
The play takes place in a classroom in a small town in an unnamed "red state," with teacher Dee (Faye M. Price) leading a group of students through a discussion about what a U.S. without racism would look like. Though grounded in reality, there is a fantastical element in that the students don't quite seem to remember how they got there, are unable to leave, and occasionally find themselves somewhere else. There's interracial couple Khadija and Kenji (Jiavani and Kurt Kwan), Trump flag-waving Sally (Michelle Barber) and her non-binary adult child Birch (Jayce Hanson), small farmers Yunia and Lawrence (Lisa Suarez and Terry Lynn Carlson), and a Black man named Harrison (Warren C. Bowles). Though they start out as stereotypes, each character is revealed to be more complicated than their label suggests, as people often are. Each one of them is at times sympathetic, and at times infuriating (although some more than others). They go through a number of activities in class, and then are magically transported to Khadija and Kenji's house, across the street from Sally's house, where they find out from a Black cop who knocks on their door that their car has been stolen. This kicks off a whole series of conversations around a multitude of issues, and then suddenly the students are back in class. The teacher is frustrated that the students don't seem to be progressing, leading everyone to bond together and brainstorm ways to strengthen their community. While everyone had trouble "imagining a U.S. without racism," which is almost too big of a shift to even comprehend, they all are able to think of the little things they can do to on a local level to begin to heal the rifts in their community.
Seema Sueko directs her script with a deft hand, effortlessly flowing from humor to heaviness to poignant moments. This cast is just incredible, including both #TCTheater veterans and newcomers to the scene. Each one of them is so present and unafraid to go there with their characters, wherever the "there" is that the script calls for.
The set at first appears to be a simple classroom wall with sliding blackboards, but soon begins to reveal secrets like hidden panels that reveal what's behind, and a section that opens up to showcase a comfortable family home. The costumes give us an instant impression of who these people are, until we learn that they're more than they appear to be. (Set design by Joe Stanley, costume design by Zahra Jangbar).
This play left me feeling such hope about our future, that while our government and systems spin their wheels, unable to come up with any real solutions to this country's very real problems of classism, racism, economic disparity, and a growing division, maybe we can enact our own solutions on the ground level to make life better for our neighborhood. And one neighborhood at a time, maybe those solutions could one day translate to a U.S. without racism. If we can imagine it, we can bring it into being. This play shows us that possibility, in a non-preachy, non-judgmental, and non-threatening way.
imagine a u.s. without racism continues through May 1, click here for more info and for pay-what-you-can tickets.