"The Family Line" by Stage North at the Capri Theater 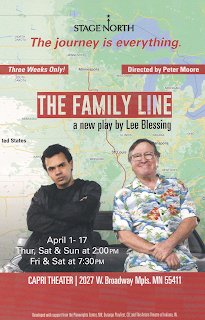 For their second production, new #TCTheater company Stage North, based at the newly renovated Capri Theater in North Minneapolis, is bringing us a new play by Playwrights' Center Core Writer Lee Blessing. The Family Line is a road trip play with a grandfather and grandson getting to know each other for the first time. Set in May 2020, it includes all the despair and complexity of that time in our recent history, but not without some humor, and a whole lot of humanity. With strong performances by the two-person cast, simple yet effective design, and relevant topics discussed, it's another strong outing for this promising new company (through April 17, click here for more info).
The play begins with two masked people in a car, but teenager Finn soon tosses the masks out the window (literally), to the dismay of his newly found grandfather Jonah. This immediately sets us back in the scary and uncertain early days of the pandemic (I once wore a homemade mask while riding in the car with my mom, with the convertible top down!). Finn's mother has just died, presumably from COVID, although it's not entirely clear. Over the course of 90 minutes, the details of the story are slowly doled out (or not, leaving the audience to fill in some of the blanks). Details like why Jonah never met his grandson, or his daughter, Finn's mother; why he agreed to make the drive from his home in the Northeast to pick up Finn from Florida and drive him to his estranged father's house in Minnesota; how Finn broke his foot; and Jonah's reaction to finding out his grandson is biracial, even though he has two White-identifying parents (I'm not sure how that happens, but genetics can be funny sometimes). Jonah has imposed a no-phone rule (torture for a teenager) so that the two can get to know each other, and begrudgingly, they do. It's not until Finn breaks the rules and buys a newspaper on one of their stops that they learn the news about the murder of George Floyd, and realize they're driving straight towards it.
#TCTheater veteran Bob Davis is paired with newcomer Hunter Reeve, and they work well together, with an uneasy chemistry that blooms into an unlikely friendship. They handle the natural dialogue well, with awkward pauses, interruptions, quick dialogue, and sometimes monologues while the other character is sleeping. They spend most of the play sitting in a silhouette of a car facing the audience, with familiar "classic car" (read: old) upholstery. Light plays against the blank background, signaling the passage of time as they drive through the day abd night. Five cutouts of state maps are the only other set pieces (Florida, Louisiana, Missouri, Illinois, and Minnesota, if I recall my elementary school geography correctly).The simplicity of the design and staging (by director Peter Moore) allows the focus to be on these two characters and their relationship.  I also enjoyed the pre-show songlist, which has a sort of Americana road trip feel, and the interstitial music. (Set design by Rick Polenek, lighting design by Sue Berger, sound design and original music by Evan Middlesworth.)
I like to say that my favorite kind of play is two people sitting in a room talking; this one-ups that with two people sitting in a car talking. Which confines the action and movement even more (they occasionally leave the car to get snacks, or switch places), so that it's all about the dialogue and the emotions of the story. It also feels like it's one of a new category of COVID plays, that deal directly with the fears and uncertainties of those days, prompting us to ask questions about where we are now and how we deal with the things we've learned in the last two years. The ending of this play is devastating, and I couldn't help thinking that Finn is one more Black or Brown kid that we failed. His family failed him, his country failed him, social services failed him, the education system failed him. The play ends with him literally and figuratively lost, alone in this scary world. Over 200,000 American children have lost a parent or caregiver to COVID, and millions worldwide. How are we going to help those kids? How are we going to help kids who are lacking opportunities due to racist systems? Those are the questions that this well-written, well-acted, well-produced play asks, but leaves to us to come up with the answers.
The Family Line continues through April 17 at the Capri Theater in North Minneapolis. The theater is on a busy and well-lit street with an adjacent (free) parking lot, so it feels like a safe way to support this neighborhood and this theater company and venue that are dedicated to improving it.