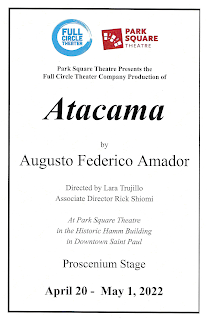 Full Circle Theater Company, a new-ish #TCTheater company that "produces heartfelt, groundbreaking theater that artfully addresses issues of diversity and social justice for 21st century audiences," is producing a new play by California-based playwright Augusto Frederico Amador. I believe I attended a virtual reading of Atacama sometime in the last two years (it's all kind of a blur), and now it's taking the stage for nine performances only on Park Square Theatre. This two-hander examines the long-lasting and devastating of Chilean dictator Augusto Pinochet's 17-year reign, during which he executed thousands of citizens who disagreed with him. It's a timely piece, when violence and human rights violations are occurring around the world.
Ignacia (Lara Trujillo, who also directs) and Diego (Pedro R. Bayon) meet in the Atacama desert, searching for the remains of bones. This is where Pinochet had many of the bodies buried, and then removed, leaving behind remnants of the murdered. Ignacia has been searching for her son for years, patiently sifting through the sand to find a piece of thigh bone or a fragment of the jaw. Diego arrives for the first time to search for his daughter, after the recent death of his wife, who was also one of the searchers. The two talk about their lives and their children - Ignacio is a communist and taught her son to be one, and he refused to give her up when he was captured; Diego is a businessman whose daughter rebelled against him. It soon becomes clear that the situation, and these two people, are not exactly as they first appeared to be. Both actors give grounded and very human performances, showing their characters' deep grief at the loss of their children, as well as the complexity of the situation that evolves.
Park Square's proscenium stage (a space I haven't seen in over two years) has been turned into a dry and dusty dessert. The painted floor and a few raised platforms to create dimension are the color of rusty sand, and there are actual piles of sand that the characters dig around in, giving a tactile reality to the gruesome and arduous task of the searchers. Silhouettes of mountains stand out against the subtly changing light of the backdrop, as time and reality shift. It's easy to imagine the characters in the vastness of the desert, with the hot sun blazing. (Scenic design by Karin Olson, lighting design by Quinci Bachman.)
In a note in the program, the playwright draws parallels with the war in Ukraine, and the attempted coup in our country just over a year ago. This play shows the resiliency of people who had their democracy taken away - how they survived, how they honored the dead, and how they moved forward. It reminds us of the vigilance required to maintain democracy.
See Atacama at Park Square Theatre in downtown St. Paul through May 1.