"The Rape of Lucretia" by An Opera Theater at Southern Theater 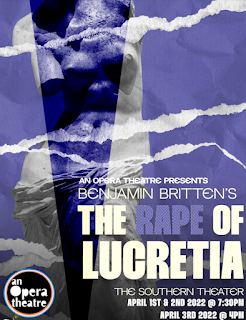 I'm generally not a big opera-goer (despite the fact that I've seen four already this year), but when I do go, I like my opera accessible, relevant, and preferably in English. The simply named An Opera Theatre started a few years ago with a mission "to produce socially-relevant works, in order to break down the barriers of the classical art form, and bring communities together." I first became aware of AOT and their great mission and work during the pandemic, with the original virtual piece In the Midst of Things: In Media Res, and also caught them performing live at the Art Shanty Projects one cold January day. They have returned to live in-person (indoor) performances with a one-weekend-only production of The Rape of Lucretia. A difficult topic to be sure, but an important one to address as violence against women, toxic masculinity, and using women's bodies as a political tool haven't changed all that much in the 2500 years since the event in question. AOT has partnered with several local organizations (Women's Advocates, Violence Free MN, Southern Valley Alliance, and Advocates for Human Rights) and even has an on-site therapist from the Domestic Abuse Project to help audience members process what they see. It's a heavy piece, but it's beautiflly and responsibly done by An Opera Theatre (click here for more info and to purchase tickets to one of the two remaining performances at the Southern Theatre).
The story of The Rape of Lucretia is an ugly one, in which Roman soldiers make bets about the faithfulness of their wives, leading the corrupt prince Tarquinius to "test" Lucretia, the loyal wife of of Collatinus. After he rapes her, she calls for her husband, tells him what happened, and kills herself. Which legend tells us led to a rebellion to overthrow the monarchy and establish the republic of Rome. So it was all worth it, right?
Written in 1946 by British composer Benjamin Britten, this opera has more of a modern sound than the classic European operas of earlier centuries. There are beautiful melodic moments, but also moments of dissonance and sharp rhythms. The music holds an incredible amount of tension, heightening the emotions of the story. Like the soundtrack of a horror movie, the music indicates when something bad is about to happen. The lovely happy sound of Lucretia and the women weaving gives way to a more ominous sound upon Tarquinius's arrival, and it's all downhill from there.
The small cast consists of just eight performers, all of them well-cast and gorgeous of voice. The story is told by a female (Tricia Van Ee) and male (Brian Wallin) chorus of one, dressed in modern clothing, stationed at desks with laptops or books, acting as intermediaries beween the audience and the story. It's an interesting conceipt, allowing them to give insight into what the characters are thinking, as well as commentary around what is happening (the opera is sung in English, with supertitles displayed above the stage, really only needed when multiple people are singing overlapping lines). Kara Morgan is a very sympathetic Lucretia, espressing her deep love for her husband (Alex Ritchie) and anguish at what happens. Justin Anthony Spenner is a menacing Tarquinius, so much so that you want to boo him at the curtain call (but this is Minnesota and we don't do that). Rounding out the excellent cast are Sahar Hassan, Meagan Seubert, and Joel Mathias.
This production also includes two dancers (Hannah Benditt and Andy Lupinek), which adds so much to the storytelling. At times they express what the chorus singers are narrating, at times mimicking what's happening with other characters on stage. It gives another level of insight into the emotions of the story and the characters (choreography by Jennifer Mack).
This piece features an all female creative team, including stage director Teresa Mock and music director Lara Bolton, who leads the fantastic 13-piece on-stage orchestra. It's such a thrill to watch all of these musicians on their different instruments play throughout the show. The Southern is a perfect venue for this piece, with the exposed arch and walls of the historic theater giving an almost Greco-Roman feel. Set pieces that look like tombstones provide a somber atmosphere, moved around by the dancers. The women are dressed in lovely flowing Grecian gowns, the men in elegant tunics. (Set design by Emily Jaques, costume design by Samantha Haddow.)
I left the show, which runs a little over two hours, thinking: how can they make something so beautiful out of something so ugly? The Rape of Lucretia is an old story, one that we can think about differently now in this modern era. An Opera Theatre's production deals with these issues sensatively, thoughtfully, and beautifully (through April 3 only).