"Memphis" by Artistry at Bloomington Center for the Arts 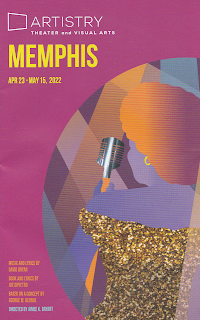 "All rock 'n' roll is, is Negro blues sped up." This quote from the 2010 Tony-winning best musical Memphis, currently playing at Artistry in Bloomington, sums up the premise of the story - the way that White rock 'n' roll artists of the 1950s borrowed, or stole, from Black R&B artists. This cultural appropriation is something we're even more aware of in 2022 than we were 12 years ago, as noted by director Aimee K. Bryant in the program: "the show appropriates the story of the birth of rock 'n' roll, just like the music industry appropriates Black music and culture. It credits Huey Calhoun with the success of the genre, instead of crediting Felicia Farrell and her brother Delray with Huey's success." Well said, and this production is fully aware of that, and much of the spotlight is given to the Black artists and music that fueled the rock 'n' roll movement. Artistry has assembled a cast that is truly an embarrassment of riches to bring us the regional premiere of the Tony-winning musical.

As previously mentioned, Memphis is about the birth of rock 'n' roll. It's loosely based on the life of pioneering DJ Dewey Phillips, a precursor to the "father of rock 'n' roll," Alan Freed. Both men were instrumental in desegregating the airwaves, playing so-called "race music" by Black musicians on mainstream (aka White) radio stations. In this fictionalized account, our DJ is Huey Calhoun - a poor "redneck" who lives with his mother and can't hold down a job. Until he convinces a radio station to give him a temporary job spinning records. People fall in love with the music he plays and he becomes the most popular DJ in Memphis, even hosting his own television show. He becomes friendly with many of the Black musicians and helps to launch the career of the lovely and talented Felicia. They fall in love, a dangerous prospect in Memphis in the 1950s. Felicia eventually realizes that she has to get out of Memphis to have the life and career she wants; her color limits her chances and choices in the South. But Huey can't leave Memphis, that's where his life and his soul will always be. The world and Felicia move on without him, but they don't forget him.* Yes, the musical makes it all about Huey, but in the end, it's Felicia who moves up and out of Memphis based on the strength of her own talent and determination.

The 19-person cast, over half of whom are making their Artistry debut, fills the stage with talent, but the two stars of the show are Vie Boheme and Matt Riehle as Felicia and Huey. Vie Boheme is a revelation (in addition to having the coolest name ever). I've previously known her primarily as a dancer, but this role allows her to use all of her talents, and they are many - an incredibly soulful and expressive voice, infectious charisma, and great depth of emotion. She's well matched in Matt Riehle, who finally gets the chance to shine in a lead role after many years of great supporting work on stages around town. He's on fire as the high energy goofball Huey, with a voice perfectly suited to the bluesy rock 'n' roll score. The best song in the score is the 11 o'clock number "Memphis Lives in Me," and he gives a fantastic and gut-wrenching performance. Watching and listening to these two powerhouses perform, and their sweet, salty, and ultimately doomed love story, is a joy.Highlights in the universally strong cast are too many to mention, but to name a few: Jay Albright stealing scenes as per usual in a number of small character roles; Emily Madigan, who doesn't need words as the mute bartender Gator, conveying all of the emotions with her facial expressions and fierce dancing (she also serves as assistant director and choreographer); terrifically talented #TCTheater newcomer Danté Banks Murray as Felicia's brother Delray (I'm not sure where he came from or how they found him, but here's hoping he sticks around); Rudolph Searles III as janitor-turned-musician and Huey's right hand man Bobby; the always great Wendy Short-Hays as Huey's racist but well-meaning mother who just maybe experiences some growth; and Rodney Patrick Fair, who does indeed wail, to great effect, as the singer Wailin' Joe and the Reverend/choir leader. And everyone looks gorgeous in the sharp period costumes designed by Joe Samuel Birch III.

The latest in the wonderful and necessary recent trend of female #TCTheater actors turning to directing is Aimee K. Bryant, making her debut with this show. It's so important to have a Black woman at the helm of this story that is, or should be, about a Black woman, a necessary perspective that helps to balance out the whitewashing of the original piece. Memphis is a big show with a big cast and big themes, and Aimee does an excellent job juggling everything and telling the story clearly, hitting all the emotional moments, as well as providing for a whole lot of fun and entertainment. Much of the latter comes from the dancing, '50s era yet fresh and exciting, choreographed by Leah Nelson and fantastically performed by the entire ensemble. The Tony-winning score sounds as if it comes from this era, with an authentic R&B/R&R sound. With music direction by Ginger Commodore, and Raymond Berg leading the rockin' 9-person on-stage band tucked under the second level of Michael Hoover's cool multi-level set, the music sounds amazing, despite a few glitches in the sound system on opening night.

It's a great time for regional premiere musicals in #TCTheater - Theater Latte Da's triumphant Jelly's Last Jam, Minneapolis Musical Theatre's site-specific Hands on a Hardbody, and now Artistry's rockin' and rollin' Memphis. See it at Bloomington Center for the Arts through May 15.

*Plot summary borrowed from my review of the 2012 Broadway touring production at the Ordway.