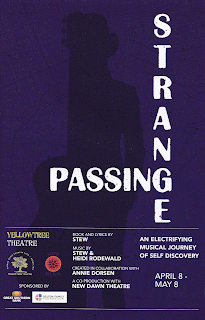 The latest offering at Yellow Tree Theatre, the little theater in the 'burbs with big bold theatrical offerings, is Passing Strange, a loosely autobiographical musical by the musician known as Stew (with help from Heidi Rodewald on the music composition). This rarely done musical (last seen in #TCTheater at Mixed Blood in 2014) is a coming of age story about a young black man from L.A. who travels to Europe in search of what he calls "the real." The narrator (played by Stew himself on Broadway) and his younger self take us on this epic journey with them, filled with the highs of love and music and the lows of grief and heartbreak, and it's a beautiful thing when he comes out the other end with a better understanding of life, love, and art.* The talented cast and creative team at Yellow Tree bring out all of the passion and poignancy of the piece, for a truly unique experience. See it in Osseo through May 8 (click here for info and tickets).

With delightful fourth-wall breaking, the narrator tells the story of the youth, occasionally talking directly to the audience or commenting on the fact that we're in a play. The hero of our story is a nameless young man, presumably his younger self, in his too comfortable life in L.A. with his mother and the church. It's the late 1970s, and he decides to go to Europe to see who he can be, rebelling against his family and country and society. He lives a life of new friends, sex, drugs, and rock and roll, first in mellow Amsterdam and then in the intense world of Berlin. He loves art above all else, and through it strives for "the real." As he grows up and experiences loss, he learns that there might be more to life than art.*

Playing the older version of our hero is the fantastic Malo Adams as the narrator, spending most of the show with the band playing the guitar in addition to singing and narrating, and occasionally coming forward to join in the story. Valencia Proctor is also wonderful as the youth, full of passion, curiosity, and a rebellious spirit. The great Jamecia Bennett reprises her role as the mother from the 2014 Mixed Blood production, with ensemble members Maje Adams, Michelle de Joya, Erin Nicole Farsté, and Antonio Rios-Luna playing every other role and providing energetic support, working hard to pump up the suburban Minnesotan weeknight crowd.

Yellow Tree's new Artistic Director Austene Van directs the piece, giving lots of space for the trippy journey and bringing it all together at the end with real poignancy. She utilizes every inch of Yellow Tree's intimate space, including the aisles, bringing the audience along on the journey. The powerful four-piece band, led by music director Jeff Bailey, is set behind the stage in what is normally the backstage area, but visible through what looks like a large whole blown through a brick wall, as if the sound and the story just exploded onto the stage (which is kinda what it feels like). This along with the lighting design (including multi-colored lanterns hanging throughout the room) bring a psychedelic rock vibe to the experience (scenic design by Justin Hooper, lighting design by Sarah Brandner).
Since their beginning, Yellow Tree Theater has challenged its audience with new or rarely done work, in addition to more familiar and comfortable work. They're continuing to do that in their 14th season, the first under new leadership. First a new take on the familiar Robin Hood story, then a return to beloved Christmas Lake, and now a rarely done rock musical that is wild and trippy, but also beautifully poignant. Passing Strange is very different in structure from the traditional musical, utilizing innovative storytelling to bring audiences along on this very personal coming of age experience that is specific to this person's journey, but universal in it's themes of love, loss, life, art, and growing up.
Next up: the funny, feminist, and modern period piece In the Next Room; Or, the Vibrator Play (rescheduled from February). It's a good time to be in Osseo.

*Some text borrowed from my review of Mixed Blood's 2014 production.