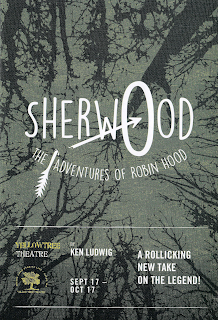 The last play seen on the Yellow Tree Theatre stage was the powerful drama Skeleton Key in February of 2020, a co-production with New Dawn Theatre Company. Their next scheduled show, the new Robin Hood comedy Sherwood, was cancelled due to the pandemic, and now, almost a year and a half later, it's finally onstage at Yellow Tree. But things have changed since then, in the world and in theater. Audiences have to show proof of vaccination (or negative COVID-19 test) and wear masks, and New Dawn Artistic Director Austene Van, who directed Skeleton Key, is the new Artistic Director of Yellow Tree (following the departure of co-founders Jessica and Jason Peterson to the North). But what hasn't changed is that this cozy little theater in a strip mall in Osseo is a warm and welcoming place with wonderful theater that entertains and challenges audiences. The super fun and playful Sherwood is an excellent start to this new chapter of life, theater, and Yellow Tree.
Everyone knows the legend of Robin Hood, the 12th century outlaw who stole from the rich and gave to the poor. But Ken Ludwig's latest madcap comedy (see also Lend Me a Tenor and Baskerville) casts the familiar story in a new and modern light. Maid Marian is no damsel in distress but an educated woman and a skilled archer, and Robin's diverse merry band of outlaws fights for justice, kindness, and unity. What a great reason to come together at the theater again!
The tale begins at the end, with the possible hanging of Robin Hood for his crimes. We know that's not really going to happen, but that doesn't reduce the pleasure of watching the story play out from the beginning, as narrated by Friar Tuck (the always hilarious Karen Wiese-Thompson). We meet Robin (played by Damian Leverett with great energy and physicality, literally leaping around the stage) at the beginning of his life and follow him from a mischievous child, to a moody teenager, to the young man who defends the poor and defenseless against the powerful. Joining the good fight in addition to the aforementioned Friar Tuck are a young woman Robin helped (Sophina Saggau), Little John (Darrick Mosley), and (eventually) Maid Marian (Michelle de Joya). James Rodriguez and Ryan London Levin make for some deliciously evil villains to fight against, while C. Ryan Shipley plays multiple characters, most notably a pompous and unintentionally quote-spouting Prince John.
Craig Johnson directs this terrific eight-person cast in a playful, joyous, and physical storytelling style, with some fast and fun fight scenes (choreographed by Mike Lubke). And in Yellow Tree's intimate space, you almost feel like part of the story. It's truly amazing the things they can do with their tiny thrust stage; the multi-level set could not be more charming with it's faux tree trunks hiding props, medieval stone walls, and greenery covering everything. The bright and colorful costumes are playful and versatile, with multiple costume changes or slight tweaks to signal character changes for ensemble members. Adding to the playful and action-packed tone are sound (the twang and thwack of an arrow) and lighting design. (Scenic design by Justin Hooper, lighting design by Kathy Maxwell, costume design by Anna Hill, and sound design by Peter Morrow.)
Sherwood is a fun, funny, playful, engaging, and heart-warming tale that joyfully welcomes audiences back to Osseo. Continuing Wednesdays through Sundays through October 17 (click here for details and tickets).