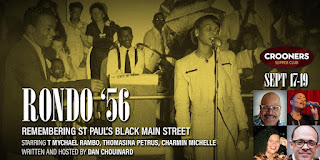 The story of Rondo, St. Paul's thriving Black neighborhood that was destroyed with the construction of I94 in the '50s and '60s, has been told before (e.g., in History Theatre's 2017 play The Highwaymen), and now it's being told through music. Created by Dan Chouinard in collaboration with T Mychael Rambo, Thomasina Petrus, and Charmin Michelle, featuring music of the era, and utilizing historical photos, Rondo '56: Remembering St Paul's Black Main Street is a celebration of what we had and a memorialization of what was lost. One wonders what our community would look like today if Rondo had been allowed to continue to flourish as an integral part of the greater Twin Cities community, instead of literally splitting it in two and displacing hundreds of Black families. The celebration of Rondo continues today with two performances (click here for details and tickets).
In the vein of Dan Chouinard's edutainment music revues with Chronofon, Rondo '56 combines historical facts and photos with period music to tell the story. Dan plays piano and leads the five-piece band, while T Mychael Rambo, Thomasina Petrus, and Charmin Michelle provide the dynamic vocals and narration. The well chosen songs feature R&B and gospel artists of the day, including Nat King Cole, Dinah Washington, Mahalia Jackson, Big Mama Thornton, and the Drifters.
The story begins in the promising post-WWII era of the mid '40s and continues through the mid '50s and the Federal Highway Act that leads to the destruction of Rondo (along with many other communities of color across the country). Two video screens in Crooners' MainStage theater show historical photos and maps of the era, and the performers share testimonials from Rondo residents. For the most part it's a fun and upbeat musical celebration, with a tinge of melancholy when we get to the sad end of the story. But Rondo isn't completely lost, as long as shows like this, the annual Rondo Days festival, and memorials in the area continue to remind us of that era and the people who lived there.
This season, the History Theatre is presenting two original plays that further explore the effects of the destruction of Rondo and the practice of redlining, the North's version of segregation, that was very much in play in the Twin Cities: Not in Our Neighborhood opens the season in October, and Not for Sale plays in February. The History Theatre is also developing a play based on Rondo resident (and father of St. Paul's mayor) Melvin Carter, Jr.'s book Diesel Heart, which is featured in this show.