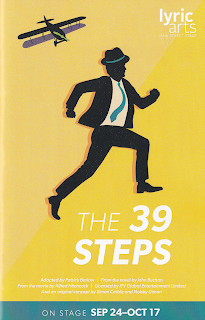 The last time I saw a play at Lyric Arts was January 2020, the bittersweet Irish love story Bloomsday. Returning to their Main Street Stage in Anoka 21 long months later felt like coming home, even without the familiar smell of popcorn, and with the new normal of showing proof of vaccination and wearing a mask. They haven't been silent during this extended intermission, producing several virtual cabarets and even a fully staged production of Lauren Gunderson's The Revolutionists for virtual viewing. But it's great to be back in that space again. This little theater in the 'burbs has an exciting and ambitious season planned, culminating in yet another regional premiere next summer, the hilarious 2015 Tony-nominated musical about musicals Something Rotten. But first, they're opening the season with the very fun and clever British mystery/comedy The 39 Steps. Welcome back, indeed.

The 39 Steps is based on the 1935 Hitchcock movie of the same name, in which Richard Hannay, a bored English gentleman with dark wavy hair, piercing blue eyes, and a pencil mustache, gets involved with a spy and goes on a cross-country adventure to save the world from some unknown evil. And since this is 1935, evil has a German accent. But the details of the plot and the chase really don't matter, it's the fun of the way that the story is told that matters.* The framework of the play gives the artists lots of room to play as they imagine this whirlwind adventure using good old-fashioned theater magic.

Lyric Arts is presenting the piece almost like a play within a play, as if the four actors are playing four actors putting on a play, beginning with an opening bow before they arrange the set for the first scene. This allows for lots of intentional missed cues (late sound effects, set items not where they're supposed to be) which add to the hilarity. In a note in the program, director Scott Ford says that as they were creating this piece, they asked themselves "what would be a goofier way to play this?" And goofy it is; not a joke or a moment is left unmilked. Pausing for greater comedic effect, pulling faces at the audience, repeating lines, they do it all, just to get more laughs. And they do; it's been a long time since I've been surrounded by so much laughter.Everyone in this four-person cast is just terrific, and they really throw themselves into the story, sometimes literally. Kyler Chase is great as the suave Richard Hannay who goes looking for adventure and finds more of it than he bargained for. I don't believe I've seen Zoe Hartigan on stage before, and she really impressed me in her portrayal of three very different and very specific women whom Richard becomes involved with. Jake Sung-Guk Sullivan and Brendan Veerman are aptly credited as "clowns," meaning they each play dozens of characters, each more wacky than the last. They even sometimes, delightfully, play multiple characters in one scene. Donning different hats and accents, they populate this mysteriously weird world. The array of British accents on display is quite astounding and fun, if not always comprehensible, to listen to (thanks to #TCTheater's favorite dialect coach Keely Wolter).The stage looks like an undressed theater stage, with brick walls, balconies, and ropes. From a selection of chairs, a door on wheels, an empty picture frame, and two rustic chests, the cast cleverly assembles every needed environment. The chic and versatile period costumes help to differentiate the multiple character changes, and the lighting and sound design are vital elements in the theatrical storytelling. (Scenic design by Peter Lerohl, costume design by Emma Kravig, lighting design by Kyia Britts, sound design by Julie Zumsteg.)

The 39 Steps, Lyric Arts' delightful return to the stage, continues Thursdays through Sundays through October 17 (click here for details).

*Plot summary borrowed from what I wrote about Yellow Tree's 2014 production.