A year and a half after their exquisitely lovely production of the sweet two-person musical Daddy Long Legs at the James J. Hill House (which I saw one and a half times, thanks to the joys of parking in St. Paul in the winter), Minneapolis Musical Theatre is back! Unfortunately, the fun and Fringey Minne-Musicals only ran for one weekend, so if you missed it, you're out of luck. But keep an eye on MMT as they continue to bring us "rare musicals, well done."

Minne-Musicals included not just one, but five rare musicals - short ten-ish-minute pieces they found at the "Sound Bites" festival at Theatre Now in NYC. Featuring five different directors, five different music directors/accompanists, and a total of 19 actors, these Minne-Musicals were also well done. This unique opportunity to see musicals performed mostly without amplification in small intimate spaces felt like a mini-Minnesota Fringe. With five pieces performed in four different locations (in Hennepin Theatre Trust's building next to the Orpheum, as well as The Chambers Hotel across the street) in nine timeslots 25 minutes apart, each audience member could curate their own experience. Sharing a space with a small audience for just 10-15 minutes at a time felt like a safe way to ease back into seeing musicals.

The five musicals were mostly comedic, but some of them also had some deeper themes:

My favorite piece was A Relative Relationship, just in terms of the complexity of the music and the characters, who felt real and whole despite the short time we spent with them. Which is not surprising; I've liked Timothy Huang's work that I've previously seen (another short musical that Theatre Elision did last year, and the full-length musical The View from Here that Nautilus produced almost ten years ago).
Sets and props were for the most part minimal, but with some creative details that were effective (e.g., The Charm's cute two-dimensional props). Costumes were specific to and consistent within shows (like the Ridgington family's color-coordinated outfits). The whole thing was well organized, well run, and another innovative take on music-theater from MMT. 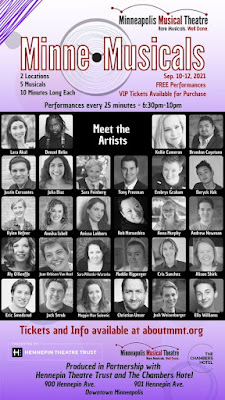