"Hopscotch: Pop-Up Plays about the Future" by Wonderlust Productions at Frogtown Farm and Park 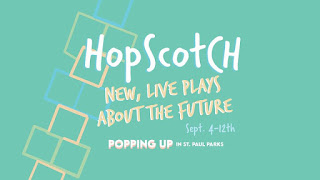 Wonderlust Productions' newest project is popping up in St. Paul parks this weekend and next. They asked an intrepid group of playwrights to imagine a future world. Which, as co-Artistic Directors Leah Cooper and Alan Berks admitted in their pre- and mid-show talks, is a difficult thing to do right now. But these ten playwrights, some of #TCTheater's best, did just that. The result is Hopscotch, a series of ten ten-ish-minute plays presented in two sets. I caught one set on a perfectly gorgeous late summer afternoon in Frogtown Farm and Park, and it was an entertaining, inspiring, and at times worrisome look at our future, and through the imagined hindsight, our present. Click here for more information and to make a pay-what-you-will reservation for today's two sets at Frogtown, or next weekend at Newell Park.

I saw Lineup A* yesterday, which includes plays by Alan Berks, Katie Ka Vang, Antonio Duke, John Heimbuch, and Becky Dale. Their imagined futures were embodied by a wonderful company of actors (Laurel Armstrong, Nathan Barlow, Javari Horne, Dominique Jones, Megan Kim, Ariel Pinkerton, and Julia Valen) in groups of two to four. They plays explore the future of communication, policing, travel, and relationships. Some of the future worlds look not so very from our present world, and some looked very different.

The plays are performed on a shady stretch of lawn in the park, with a sound system and actors miked (a little tricky in the wind, but that's outdoor theater). The actors have plenty of room to move around, interacting with each other and with nature. Some of the plays include music, by cellist Elise Butler-Pinkham, or sung by the cast. All five plays are very different, some feel like complete little stories, some left me wanting to see what happens next.

Because Wonderlust is always about engaging the community, they've developed a quiz you can take to tell you what kind of futurist you are (I'm a Chill Futurist, and a little bit Romantic, which sounds about right). And they left time in between plays for discussion amongst the audience.

Labor Day weekend marks the end of summer, and joyfully, the beginning of the 2021-2022 #TCTheater season - indoors in actual theaters (mostly with vaccine and mask requirements). Hopscotch is a nice transition from the outstanding outdoor theater we've had this summer, into the first official theater season we've had in a long time. A season that, like these plays, will very likely grapple with our tumultuous present and imagined better future.

*The two sets are at 3:30 and 6:30, each runs 75-90 minutes, so there's about a 1.5-2 hour wait in between if you want to see both. Lineup B includes plays written by Kira Obolensky, Alayna Jacqueline, Leah Cooper, Oogi Push, and JuCoby Johnson and performed by Jennifer Blagen, Katie Bradley, Ernest Briggs, George Keller, Kurt Kwan, Ian McCarthy, and Siddeeqah Shabazz.