"Songs for a New World" at Artistry 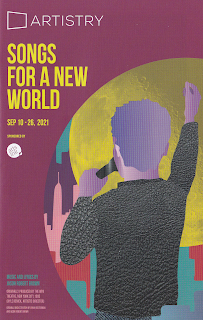 There's no question we're entering into a new world, after a tumultuous year and a half that included a global pandemic we're still very much in the middle of, but starting to learn how to safely navigate; a racial reckoning; a contentious election and attempted coup; and fires, floods, and other natural disasters occurring at an alarming rate. So what better way to begin the 2021-2022 #TCTheater season (which can hopefully continue with the help of vaccine and mask requirements for many venues) than with Jason Robert Brown's Songs for a New World. His first produced musical from 1995 feels every bit like it was written for this specific moment. But that's great art - it takes on new meanings as our world changes. Especially when interpreted by great artists to speak to the now of it, like this incredible team at Artistry. They've expanded the cast from four to nine, expanded the typically small band to seven, and even hired three directors. Adding these additional voices to the piece only makes it richer, fuller, and more meaningful. If you feel comfortable going into a vaxxed and masked theater (and I understand if you don't; I moved at intermission to a less crowded location in the theater), go check out this beautiful and incredibly moving production, continuing through September 26. Bring your vaccine card, mask, and tissues.

Artistry bookended their 19-month extended intermission with Jason Robert Brown. They closed their gorgeous production of The Bridges of Madison County (my favorite JRB score) on February 16, 2020, and opened Songs for a New World (and re-opened their theater in Bloomington Center for the Arts) on September 10, 2021. He's a master at putting emotion into music, and this score contains the full range. I saw it five years ago (a lovely production by Minneapolis Musical Theatre) and have listened to the score periodically since, but it was like I was hearing it for the first time last night. Lyrics like "And oh, you're suddenly a stranger, In some completely different land" and "Nobody told you the best way to steer, When the wind starts to blow" and "I know it's dark right now, But just believe somehow, That soon there will be light" spoke to me in a way they never have before.

Songs for a New World is a song cycle, like 16 mini-musicals in one, all around the theme of the moment of transition. Co-directors Vanessa Brooke Agnes, Colleen Somerville, and Max Wojtanowicz have done a wonderful job telling the individual story within each song, and also connecting them into a greater whole. And they've chosen just the right cast member(s) to sing each song and play each mini-role, all of whom have a moment or several to shine. The show opens with dancer Elly Stahlke stepping through the curtain onto the stage, as if for the first time in a year and a half, exploring the space and the wonder of it. Adding this element of dance and movement (movement director Kelli Foster Warder) was a brilliant choice; throughout the show she's like a sprite embodying the emotion of the moment, or maybe she's the observer/listener/student. There's a moment at the end, which I'm not going to spoil, which really ties the whole thing together in a full circle moment of completion.

This cast really sounds amazing singing together in richly layered harmonies, or solo. Resident music director Anita Ruth leads the onstage seven-piece band (and even hops on piano for at least one song) on this complex and varied score, and just brings out the best in everyone. A few highlights from this talented cast:

Playing off the theme of moments of change or transition, the gray-toned set features doors, both in the backdrop in front of the band, and as rolling set pieces that are used to create other shapes. A steel staircase and chairs are thoughtfully used through to create movement and interest. The cast is dressed in chic streetwear of denim, black, and gray, which gives way to crisp white for the dramatic conclusion. The lighting designs punctuates the story and creates some great effects. (Scenic concept by Katie Phillips, wardrobe styling by Maureen Sherman-Mendez, lighting design by Karin Olson.)
It was not only a genius choice by Artistry to choose Songs for a New World as the first show of their exciting and diverse new season, but they also look pretty smart by taking this simple but profound show that would be effective if sung by four people standing on a stage, and making it even more impactful by expanding it through a larger and more detailed design, cast, and band. In doing so, it has become exactly the show we need right now.