"The VAXXED and the Furious" at Bryant-Lake Bowl 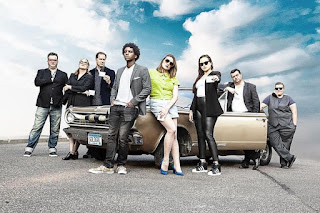 It feels so good to return to Bryant-Lake Bowl and Theater, the quirky little theater behind a bowling alley in Uptown, 19 months after seeing my last pre-pandemic show there. It's primarily a home for comedy, although I've also seen plays and musicals by small theater companies there over the years. The restaurant and bowling alley have been open for a while, but they're just now returning to live programming in the theater (with proof of vaccination required). You can see their full schedule here, which includes one more weekend of performances of The VAXXED and the Furious, featuring some of my (and your) favorite funny people in town.

The VAXXED and the Furious is a series of short sketches taking inspiration from our recent lives, as well as just general silliness. The ridiculously funny cast includes Gracie Anderson, Josh Carson, Shanan Custer, Brad Erickson (a one-night-only replacement for Jim Robinson), Aisha Rageb, Allison Witham, and Aron Woldeslassie. As you might have guessed from the genius title, the opening sketch is a spoof of Vin Diesel meeting with a writer brainstorming ideas for the next movie in the Fast and Furious franchise, like, what if cars had feet? My favorite sketches include personified pets, who have grown so used to having us around all the time, and they love it (or don't they?). There's also a Zoom therapy session that causes more stress than it relieves, an 18th Century sketch about "Make Britain Great Again," two friends in shock that their friend doesn't like Ted Lasso (but it's so good!), a really uncomfortable theater talk that's a little too true, and an even more uncomfortable but very clever spoof of the idea of "Netflix and chill," only with Disney+ and singing household items.

If you, too, are vaxxed and furious, get out there and support the return of performing arts! This show continues September 16-18, with tickets just $12-15. Doors open at 6 for the 7pm show, with dinner and drinks service before and during the show.