"Hands on a Hardbody" by Minneapolis Musical Theatre at Luther Cadillac 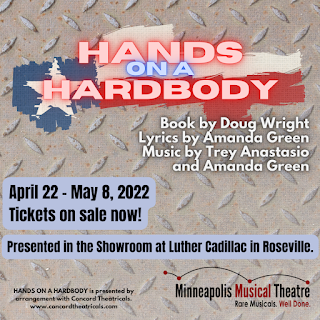 "Rare Musicals. Well Done." That's Minneapolis Musical Theatre's motto, and one they live up to time and time again. In their first full production in over two years (they produced a series of ten-minute Minne-Musicals one weekend last fall), they're bringing us the regional premiere of the musical Hands on a Hardbody, based on the 1997 documentary of the same name about a Texas contest to win a truck. It only ran for a few months on Broadway in the spring of 2013, but has since become something of a cult hit. As MMT has shown before (see also High Fidelity), sometimes shows that don't work on a big Broadway stage work brilliantly in a more intimate and site-specific space. I was expecting a fun time, which I got, but I wasn't expecting to be moved to tears by these very human stories of people trying to live the American dream, and what happens when that dream fails them. Performed with MMT's usual heart, gusto, and authenticity, in a car dealership showroom of all places, Hands on a Hardbody is a don't-miss-it opportunity for music-theater fans. But it's only playing for a few weeks, with limited seating, so get your tickets now (click here for details)!
In the showroom of Luther Cadillac near Rosedale, with a wall of windows looking out at the traffic whizzing by on Highway 36, the show takes place in, on, and around a big red Nissan pickup truck. An indoor showroom during the longest Minnesota winter in recent memory is not quite outdoors in the blazing Texas heat, but we can pretend. Ten people have entered a contest at a failing dealership (which desperately needs the business they're hoping this contest will spark) to win a truck by simply standing next to it with their hand on it. The last person standing wins - simple as that. Throughout the course of the show we learn each person's story about why they want, no need, to win this truck, and how it will change their life. Whether it's to pay for veterinary school, or support their children, or go to Hollywood, or recover from a job lost due to injury, all ten of them are in a desperate place. During the 5+ days of the contest, relationships are made or broken, truths are revealed, and one by one the contestants drop off until we have a winner. These very human and relatable stories create many tender moments, and give this show based on a ridiculous concept real poignancy. Because why would anyone agree to stand outside in 100 degree heat for days on end if they weren't in a place where their job, their family, their relationship, or their country has failed them? And soon you begin to realize that the truck is a metaphor for whatever in life is important to us, that we try so desperately to hold on to, and sometimes slips from our grasp when we're not looking.
Sara Pillatzki-Warzeha does a great job directing this 18-person lovely, talented, and diverse cast, balancing humor and poignancy. The showroom floor space is well used, with most of the audience facing the truck and windows, and some seating on either side (they have a sliding scale based on location and seating). The contestants move around the truck so you can see all of them, and they get to come off of it and move around the space during the contest's breaks every six hours. Abbi Fern has created some fun choreography, an impressive task when much of the cast has to dance with one hand stuck to a truck. Music director Jean Orbison van Heel leads the fabulous six-person band on one side of the performance space, making this clever and catchy Tony-nominated score sound great. The lighting design signifies changing time of day and creates some cool effects, although there were a few sound and lighting miscues on opening night that are not unexpected in such an unconventional space, and I'm sure will be worked out as the run continues (lighting design by Jeffrey R. Johnson, audio design by Abe Gabor).
The cast includes a few familiar faces and many news ones; MMT is great at discovering and giving space for new and lesser known #TCTheater talent. Highlights are many, including Marie Finch-Koinuma and Emily Rosenberg as the sweet young couple who meet at the truck and decide to run away together; James Lane as a previous winner who is a jerk you love to hate but can't help but empathize with in the end; Christian Unser as the Willy Loman-esque down-on-his luck blue collar worker and the lovely-voiced Aly O'Keeffe as his long-suffering wife; Roland Hawkins II with a big voice and energy to match as the Snickers bar- and ladies-loving Ronald; Kyle Doherty expressing raw vulnerability as the recently returned vet; Gianna Schiller and Charlie Morgan as the typically smarmy car dealers; and John Goodrich as the amiable and ever-present radio DJ host of the contest.
I love regional premieres; I love rare musical gems; I love the creativity of unconventional theater spaces; I love a show that makes me laugh and cry, think and feel; I love a cast and creative team that puts their whole heart into a project; I love not having to drive into or through Minneapolis or St. Paul to see a show. Hands on a Hardbody is all of the above and more. There are only 8 shows left - don't miss it!