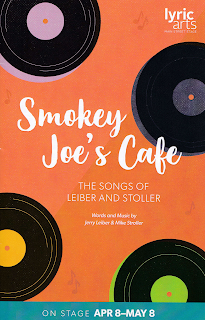 If you follow #TCTheater, you've probably heard about the reaction to Lyric Arts' initial casting announcement for Smokey Joe's Cafe, which historically has a mostly Black cast, and the disappointment in the community about their lack of diversity. They took that feedback and did another round of casting, bringing in more performers of color (read the full story it here). I've long been a fan of Lyric Arts, and have also called out their lack of diversity (see here and here). I know it's something they've been working on for years, and I know it's a challenge, being a theater in the suburbs that can't afford to pay much. This production stands as an example of doing the outreach to cast a wider diversity of artists, facing limitations in that, taking feedback, and making changes to improve. The addition of more BIPOC cast members can only have made this show better, to the point where it has become a big, boisterous, multi-cultural community celebration of this beloved music, really paying tribute to the legacy of Leiber and Stoller, two Jewish men who often wrote for Black artists and helped introduce them to White audiences. It was a difficult road to get to opening night, but Smokey Joe's Cafe is a success as a fun and entertaining show, as well as an example of a theater doing the work to make their show more inclusive and representative. See it at Lyric Arts in Anoka weekends through May 8.
Leiber and Stoller wrote over 70 hit songs, mostly in the '50s, recorded by a multitude of artists including Elvis and The Coasters. About 40 of these songs were compiled into a musical revue that debuted on Broadway in 1995 and ran for five years. The show was revived a few years ago Off-Broadway, a production that was recreated at the Ordway in 2019. What I love about this musical is that it doesn't try to create some silly story to tie all of the songs together with cheesy dialogue (i.e., the jukebox musical). In fact there's no dialogue at all, just continuous music. But the fun thing is that each song is a mini story unto itself (as good songs are, and these are good songs). The staging creates a sense of relationships among the cast as they're telling these separate little stories in each song, that together combine to form a loose story of a group of old and new friends hanging out at a bar. No words needed, other than Jerome Leiber's clever lyrics combined with Michael Stoller's catchy tunes.*
The expanded cast includes 15 performers (compared to 9 in the Ordway's production), and the creative team (director Vanessa Brooke Agnes, music director Ross Edward Bell, and choreographer Demetrius McClendo) has done a great job divvying up the songs and playing to each performer's strengths, creating some interesting pairings and groupings. One nice addition to the show is the mixing up of genders in terms of who sings what songs, and to or with whom, including some queer relationships (not so surprising from a theater that once opened a season with The Laramie Project and closed with RENT, pretty brave for a theater in the 'burbs). Non-binary performer Martinoa Mayotte brings their own flavor to every song, and is just as comfortable singing with the boys, dancing with the girls, or vamping it solo. It's hard to pick highlights out of this young, beautiful, and talented cast, but if there's a break-out star, it's Uchenna Korus, who turns "Fools Fall in Love" from a silly little ditty to a plaintive ballad, raises the roof with "Saved," and then brings it crashing down with a powerful "I (Who Have Nothing)." Other highlights, to name just a few, are the ball of energy that is Chris Owuso, Audrey Johnson's emotional performance of "Pearl's a Singer," dance captain Jaclyn McDonald teaching us all how to shimmy, the powerful voice of Abilene Olson, the comedy stylings of Marley Ritchie, Bradley Johnson's rousing "Jailhouse Rock," and Curtis Burton representing the older generation, and the lower end of the scale, as Smokey Joe himself, proprietor of the Cafe.
This production is set in the '90s, which doesn't really matter, and you wouldn't know it except for the fashion and the pre-show music. The idea is clear - a bunch of old friends gathering again and reminiscing, as they're renewing, ending, or making new relationships. The set (designed by Sadie Ward) includes an enclosed bar space, chock full of memorabilia, with a cozy sitting area on the roof reached by a spiral stair, and descended from, for the young and brave, via a firefighter's pole. The fabulous five-piece band (including the music director who also plays some percussion) is seated onstage on a raised platform, making them part of the show. The set allows for many different staging areas, and the director uses all of them, keeping the show moving. But the center of the stage is left open for this large cast to get together and dance, with some fun choreography that allows for different movements amongst the cast, making it feel like a casual get-together of friends rather than a performance by professional dancers. The entire cast is onstage for most of the show, sitting and chatting with each other if not participating in the current song, bringing authenticity to the relationships in the group.
It was a long and bumpy road for Lyric Arts to arrive here, but the results of their efforts show in this inclusive, welcoming, entertaining show. Check out a clip of highlights below, and then click here to get your tickets.
*Some text borrowed from my review of the Ordway's 2019 production.