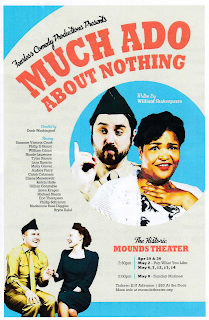 Two years after it was originally scheduled, Fearless Comedy is finally bringing us their 1940s-set take on the Shakespearean rom-com Much Ado about Nothing. It's fun to see a comedy company, that often does new work, take on one of the original comedians. The large and talented cast and inventive staging at the Historic Mounds Theatre make for a delightfully fun evening of Shakespearean comedy. See it now through May 14.
Much Ado about Nothing is actually one of the lesser produced Shakespeare plays, at least in recent #TCTheater history; I hadn't seen it in over ten years. The plot centers around two romantic couples, the sweet and innocent young lovers Hero and Claudio, and the constantly bickering frenemies Beatrice and Benedick, who each swear they'll never marry. Which means that by the end of the play, of course they will. Their friends and relations conspire to make each think the other loves them, which makes them realize they, too, love the other. Unfortunately for poor Hero and Claudio, forces conspire against them, based on a vendetta of the bastard brother of the prince. There are some dramatic moments, but in the end the truth comes out and our couples are reunited for a happy ending.
Director Duck Washington and the creative team have made a couple of choices that make this production unique. One is the 1940s era setting, which gives it a feel of the comedy movies of that era. The play begins with soldiers returning from war; in this version it's WWII. So the soldiers are dressed in those classic khaki colored uniforms, and the women in beautiful '40s era dresses (costume design by CJ Mantel). Another interesting choice is the staging. Although Mounds Theatre does have a stage at one end, Fearlesss Comedy rarely uses it in the traditional way. For this show they've turned things around, with the audience seated with their backs to the stage, facing the entrance to the old movie theater and a large open space on the floor. This gives it a more intimate, almost Ten Thousand Things like feel, with ample space for the action to occur both on the floor right in front of the audience, and in the elevated entrance area. There's even a balcony that's put to good use, and minimal simple set pieces to complete the look - a bench, a fountain, and lots of trailing vines with roses (set design by Tim Wick). This unique staging feels so much more dynamic and immersive than a traditional proscenium stage.
The large cast is consistently good, playful and present, funny but not over-the-top. Several traditionally male roles are played by women, which is pretty common in Shakespeare these days since, you know, women can act now. Both couples are well-cast. As Beatrice and Benedick, Suzanne Victoria Cross and Philip D. Henry both have biting sarcastic delivery of their great lines (as well as hilariously crawling around on the floor and hiding behind objects that don't actually hide them), and also believably transform into lovesick creatures. Nicole Laurenne and William Edson are also sweetly believably in love as Hero and Claudio. Other highlights include Lana Rosario as Hero's strong mother Leonato (traditionally her father), Tyler Stamm as the prince Don Pedro, and Molly Glover stealing scenes as Dogberry, the ridiculous head of the Night's Watch.
Head to the Historic Mounds Theatre in St. Paul's Dayton's Bluff neighborhood for a new take on a classic. While I wouldn't have minded if they had tightened it up and trimmed it down for a shorter runtime (nearly three hours pushes my limits), but on the whole it's a fun, playful, intimate, and entertaining evening of Shakespeare.