"All American Boys" by Stages Theatre Company and Capri Theater 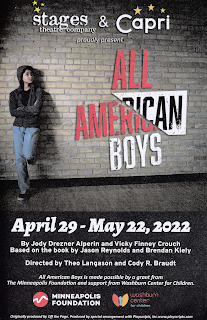 Stages Theatre Company (Hopkins) is partnering with The Capri Theater (North Minneapolis) on an adaptation of the book All American Boys, a story of how a school and its students are affected by police violence against a Black teen. It's an incredibly inspiring and insightful look at one of the biggest and toughest issues we're facing right now, and these kids (it's primarily a youth cast, like most of Stages' work) do such an amazing job. It's hard enough to be a teenager, but a teenager living with all of the uncertainties of today's world, a Black teenager living with the knowledge that they could be beaten or killed for simply trying to buy a bag of chips, it's unthinkable. This play and these incredibly talented and open-hearted young actors do a beautiful job of bringing that experience to life. Really the only thing that gives me hope these days is our young people; they can show us the way out of this mess if we just let them, and listen to them. You can do that now through May 22 at the beautifully renovated Capri Theater (click here for info and tickets).
Adapted by Jody Drezner Alperin and Vicky Finney Crouch from the 2017 book by Jason Reynolds and Brendan Kiely, All American Boys tells the story of two such youth. Quinn (Jaden Corniea) is the type of kid most commonly associated with that phrase (white, athlete, popular), while Rashad (Miles Johnson) less so (i.e., Black), but his story is every bit as American. The story begins on a typical Friday night, all the kids at school are anxious to be let out to enjoy their weekend, talking about parties and plans. Rashad stops by the local store to buy a bag of chips, but when a drunk woman trips over him as he's digging in his backpack for his phone, the owner of the store and a cop assume that he must be trying to steal the chips. Despite Rashad's attempted explanation, the cop beats him up and arrests him. Rashad ends up in the hospital with a couple broken bones, a video of the beating ends up on TV, and the kids at school start taking sides. Quinn is torn because the cop is a family friend, but he feels for Rashad too. The play ends at a protest, with everyone showing up, and a recitation of a too long list of familiar names of Black men and women killed by police, "absent again today."
The play is written with a chorus, kids speaking in unison or individually as narration or commentary, which is effective both as a storytelling device and as a way get everyone involved. I was super impressed by everyone in this young cast. They're supported by several adult actors (Peter Colburn, Joh Easley, Jamila Joiner, Kim Kivens, Danté Pirtle, Michael Venske, Jeanette Warner, and Stages' Resident Artists Roy Richardson Jr.), but the kids carry this show, and they're all so open, present, natural, and passionate in working together to tell this story. Truly an impressive group of young actors under the leadership of co-directors Theo Langason and Cody R. Braudt, who have created a dynamic and engaging story in which everyone gets a voice.
On the newly renovated stage of the historic Capri Theater, the high school set is represented by lockers, with chairs, a hospital bed, store shelves, and other set pieces rolled on and off stage by the cast. Appropriately chosen songs are played between scenes, making scene transitions interesting and informative. Video projection is also used to help set the scene, with lighting punctuates moments and emotions. (Lighting design by Grant E. Merges, composition and sound design by Peter morrow and Maje Adams, set design by Joe Stanley.)
This is such an important piece for kids living in today's world, to help them understand and process what they see on the news or experience on a daily basis, especially coming on the heels of the report by the Minnesota Department of Human Rights that the Minneapolis police violated Civil Rights laws. In less than 90 minutes, this play really gets to the heart of the issue in a very real and human way. All American Boys is a heart-breakingly beautiful look at the kind of world our boys and girls are growing up in, and this group of young people gives me hope that they'll be the ones to make it better.