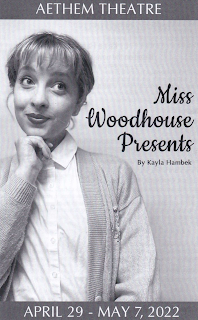 In a delightful piece of Jane Austen fan fic, Aethem Theatre Company brings us the new play Miss Woodhouse Presents, written and directed by their Managing Director Kayla Hambek. It's a sort of mash-up of all of the novels, in the form of a British reality TV show. In just 90 minutes, we see love lost and won among the Dashwoods, the Bennets, and more familiar characters. Fans of Austen, who are not too precious about it, are sure to enjoy. The short run ends this weekend; you have just three more chances to see this charming play at Elision Playhouse in Crystal (click here for info and tickets).
The setting is noted in the program as: "England, 1800-1814 but also 1940... don't worry about it." A bit confusing, with the '40s era wardrobe, the modern reality TV style, and the 1800s plots. But as the note says, it's all in good fun, so you just have to go with it. The show within the show Miss Woodhouse Presents is a sort of bachelorette kind of contest, hosted by none other than Jane Austen's matchmaker Emma Woodhouse (Gabriella Abbot), with her trusty sidekick Harriet (Maddie Ripperger), and produced by a Mr. Knightly (Raúl Arámbula). Like in the novel, Emma is intent on finding matches for everyone around her, not realizing that her own true love match is (sometimes literally) right under her nose. She checks in remotely with various "bachelorettes" around England, nominated and reported on by a friend. We have the Bennet sisters (Pride and Prejudice), the Dashwood sisters (Sense and Sensibility), and 27-year-old "spinster" Anne Elliot from Persuasion. If you're not familiar with the source material, there's a brief description of each in the program, and the plots are pretty clearly laid out, the full stories told in a few short segments. It's a clever way to mash up all of the books into one story.
Playwright Kayla Hambek directs her work in a light and playful way, sometimes with broad comedic effect. The cast (also including Lois Estell, Nissa Nordland, Eva Gemlo, Kayla Dvorak Feld, Noah Hynick, and Brendan Veerman, each playing multiple characters differentiated by voice, physicality, and wardrobe) has a lot of fun with various British accents and plays up the laughs, with a few poignant moments nearly drowned out by the laughter. The stories are well differentiated, and the ensemble gets to show a wide range of characterizations. In between the main stories, we hear some funny ads for other shows that are reminiscent of popular British shows. Minimal set and props allow the actors and the imagination to set the scene. The 1940s costumes (designed by Olivia Schwab) provide a basis for the addition of character pieces as the ensemble members quickly transform from one familiar character to the next.
More than 200 years after her death and we still can't get enough of Jane Austen, whether in film, TV, book, or play form. Her strong female characters, who do what they can to define their own lives and make their own choices, within the limitations forced upon them, are always inspiring and relatable. Miss Woodhouse Presents is a playful, tongue-in-cheek, clever, and concise look at these stories and characters we love so well.