"Diary of a Wimpy Kid" at Children's Theatre Company 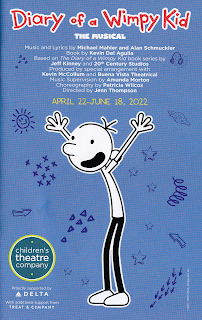 To close out their 2021-2022 season, Children's Theatre Company is bringing back their original musical adaption of the popular book series Diary of a Wimpy Kid. I saw 2016 premiere, and although I had no prior experience with the source material, I was thoroughly charmed by it. The creative team has updated the show to add new scenes and songs, but my memory is not good enough to notice which ones, although I did note a Tik-Tok reference, which wasn't a thing six years ago. So they've tweaked the show a bit to make it feel fresh and new, but what hasn't changed is the incredible talent of #TCTheater youth (plus a few out-of-towners) in bringing to life this "clever and musically diverse score, universally relatable story of a kid trying to find himself in middle school" (as I wrote six years ago). "Whether you're a kid stuck in the middle (school), or a jaded grown-up, Diary of a Wimpy Kid: The Musical is simply irresistible." What follows is my 2016 review, plus a few tweaks for the current production, which continues through June 18.

Greg Heffley is stuck in the middle. He's the middle son in the family (with an scary teen older brother and a spoiled little brother), and in the middle of the popularity ranking in middle school. The story plays out over the school year as Greg tries any and everything to move up in the ranks. The musical recounts his adventures as he tries (and fails) to be good at sports, the best smile, class clown, newspaper cartoonist, treasurer, safety patrol, anything that will earn him a place in the yearbook to go down in history. Along the way he learns lessons about friendship and doing "the right thing." It's a sweet, heart-warming message that's not preachy, but told in a language kids (and adults) will get.

Greg narrates his story and is on stage for pretty much the whole show. As such the role is double-cast, and I saw Chicago-based Patrick Scott McDermott, who already has Broadway and national tour credits. He's such a pro, very charismatic, with a great young voice, and a true lead who makes Greg likeable, relatable, and at times exasperating, as any middle schooler should be. Another out-of-towner, Kamryn Henderson, is also great as Greg's best friend Rowley, so sweet and enthusiastic and unaware that sometimes Greg is annoyed by him. The rest of the child cast is local, and they're all so incredibly talented, really owning the stage and making this show their own. They're supported in the adult roles by CTC company members Autumn Ness and Reed Sigmund (real-life married couple playing Greg's mom and dad), Dean Holt (a number of scene-stealing roles), and performing apprentice Rue Norman. But really, this show is about the kids, and they make the future of #TCTheater look bright.The creative team is mostly from the Chicago area, so if not a strictly Minnesota creation, it's at least Midwest born! Michael Mahler and Alan Schmuckler combined their talents to write the music and lyrics, with Kevin Del Aguila contributing the book. There's a lot of music in this show, and includes everything from rap to gospel, heavy rock to bubble gum pop. The music flows quite naturally into and out of the story. Amanda Morton leads the five-person pit orchestra and keeps the score moving along at a brisk pace. Scenic designer Scott Davis has designed a two-dimensional cartoonish set that I assume was inspired by the books. Everything appears to be drawn on lined loose leaf notebook paper, with projected images commingling with the physical set pieces to create a world that looks like it stepped out of a diary. Jenn Thompson directs the large and young cast, keeping everything moving smoothly and with great momentum, connecting the diary vignettes into a cohesive story. Broadway choreographer Patricia Wilcox has created some fun, sharp, modern dances that the young casts performs with great energy and precision.

Diary of a Wimpy Kid: The Musical is a brilliant creation based on a beloved children's story, that comes across as a sort of a mash-up of Grease and Spring Awakening for the pre-teen set, with a little Billy Elliot thrown in. Even though I didn't think it would have anything for me, a grown-up with no kids and no familiarity with the source material, I found it to be a highly entertaining show that speaks to the middle schooler in all of us. Doesn't everyone feel "stuck in the middle," confused about "doing the right thing," trying to figure out where we fit in our various communities? This musical celebrates that in a joyful, funny, heart-warming way, with an incredibly talented cast of young people. Wimpy Kid continues at Children's Theatre Company through June 18. Take your favorite little ones, middle schoolers, or just go yourself and experience this exciting musical.