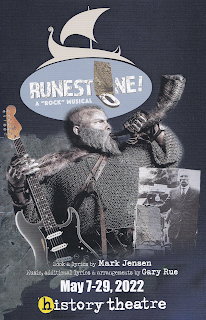 Who else but the History Theatre can take a bizarre Minnesota legend and turn it into a super fun, entertaining, and even thought-provoking musical? Who else would even attempt such a thing? In the vein of their smash hit Glensheen (returning to St. Paul this summer after a tour through outstate Minnesota), History Theatre brings us the new original musical Runestone! A Rock Musical, a show many years in the making about the Kensington Runestone. I first saw a reading of it in 2019 and was so intrigued that I visited the original Runestone in its museum the next time I was in Alexandria. The musical's 2020 premiere was postponed along with so many things, but it's finally seeing the stage in a terrific production continuing through the end of the month.

Playwright and lyricist Mark Jensen grew up near the Kensington farm where Olof Ohman claimed to have found a medieval runestone in 1898. In the 124 years since, scholars have debated the validity of the stone, said to have been carved by Vikings who made it all the way to western Minnesota in 1362, but most experts agree that it's a hoax. But what is a true story is that the stone changed the life of Olof and his family forever, with tragic results. This piece is very sympathetic towards Olof, who was reportedly an honest (and perhaps not very bright) man, and focuses on the human aspect of the story. But if Olof didn't carve the stone, and really did believe he had found an ancient runestone, then who did carve it and put it in that field for him to find? The musical explores several different theories for how, when, and why the stone was carved, in a mostly comedic way, but in doing so it delves into relevant modern issues like what is truth, how media distorts it, and the effects on actual human lives when a story "goes viral."

We travel more or less chronologically through the story, from the discovery of the stone, to the initial
excitement when it was displayed in a bank in Kensington, to its discrediting by scholars, to various people using Olof and the stone to promote their own agenda, to the continuing of the debate even after Olof's death. We also see several imagined scenes of the carving of the stone - Vikings, the Knights Templar, Olof himself with various accomplices. A lot of ground is covered, with ensemble members narrating the story as we travel swiftly through time and space.

Just eight actors bring this epic story to life, several of whom have been with the project for years. Including Sasha Andreev, who is an incredibly empathetic Olof, really grounding the bizarre story in humanity. It's easy to believe Olof's story; I believe every word that comes out of Sasha's mouth, especially when sung with that beautiful voice! And fortunately even after Olof dies (spoiler alert), Sasha still appears as ghost Olof continues to be part of the story. Representing Olof's large family are Ivory Doublette as his wife Karin, Ryan London Levin as his son Edward who was with his father when the stone was discovered, and Kiko Laureano as his daughter Amanda, who was perhaps a bit too involved in preserving her father's legacy. These three plus the four other hard-working ensemble members (Eric Morris, Wesley Mouri, Adam Qualls, and Jon Andrew Hegge) all play multiple characters, filling out the world of the story in a way that makes this feel like a much larger cast than it actually is. Tyler Michaels King directs the piece and deftly navigates the changing tones, times, and locations, laugh-out-loud ridiculous scenes nicely balanced with more poignant moments. And this dreamy cast makes it all work, and has a lot of fun playing with Minnesota accents (and of course a few lutefisk and lefse references).

Local musician Gary Rue composed the score, which is so fun I'd love to have a recording of it. It's big and bold with catchy melodies and great harmonies. It feels like this story always wanted to be a rock musical. The terrific four-piece rock band, directed by Brian Pekol on keyboard and also including the composer on guitar, is on an elevated stage behind the action, hidden behind a curtain for most of the show but revealed at opportune moments. Joel Sass designed the rustic barn set that is dominated by a gorgeous Minnesota cornfield, one of my favorite sights, filling the space behind and to either side of the stage. A show about a runestone has to have a stone, and props designer Abbee Warmboe has beautifully recreated it on a movable platform so that the characters can interact with it almost like a ninth actor. I especially love the ingenious way that the stone is placed inside the tree roots so that it can be discovered again and again. Sonya Berlovitz's simple but kinda genius costumes clad everyone in neutral toned shirts and pants that could work in any century, with character changes signified by adding a skirt, jacket, tie, hat, or other accessory.

Now you don't have to go to Alexandria to "see the stone" (although it's a charming city with lots of shops and restaurants, many many lakes, and even a theater), you can see this local legend brought to colorful musical life right here in St. Paul. Runestone! A Rock Musical continues through May 29 and will also be available for virtual viewing.