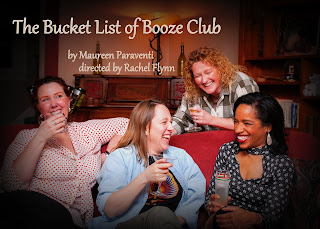 In their first production in over two years, Freshwater Theatre Company is bringing us a new play by Michigan-based playwright Maureen Paraventi called The Bucket List of Booze Club. An odd title for a sweet and salty, funny and poignant play about female friendship and the mother/daughter bond, which couldn't be more appropriate for this Mother's Day weekend. This very real and relatable story is beautifully brought to life by the cast and creative team at Freshwater. But only 6 performances remain in this short run, so bring your closest friends, a parent or child, or yourself to the Crane before it closes on May 15 (click here for info and tickets).
It's 2008 Detroit, and a group of friends in their early 50s, who have been friends since they were teenagers in the 1970s (allowing for a fab '70s soundtrack) gather once a week to try a new kind of booze - unusual spirits like Grappa, or Absinthe, or Slivovitz. It's a bucket list because one of them has cancer; single mother Collette (Wini Froelich) may not have much time left to live out her motto: "try everything once." So her friend Jen (Jean Wolff), a successful lawyer and the only single one in the group, arranges this trip through the spirits. They're joined by new grandmother Mary Ann (Lynda Dahl), who's dating a much younger man (Nick Manthe), and Amy (Julie Ann Nevill), a member of the "sandwich generation," caring for adult children, child-like husband, and aging parents. Collette's daughter Ree-Ree (Ali Daniels), also a lawyer in the early stages of her career, joins them as they chat and commiserate, like girlfriends do. They also disagree, argue, and fight, but they're there for each other when things get rough, i.e., when Collette receives her prognosis.
Under the direction of Rachel Flynn, the seven-person cast (also including Paul Somers in a couple of roles) very much feels like a group of old friends, with natural and lived-in performances. Scenes flow smoothly from week to week, spirit to spirit, with a few flashbacks of earlier days in the women's lives, and scenes of one of the women in a side conversation, with soliloquys to give us more insight into the character. A detailed and cozy living room takes up most of the performance space, with a table off to the side for the other scenes. Lighting aids in the transitions between scenes and moods, and each of the women is dressed appropriately for their character, from fashion-conscious Jen to stay-at-home mom Amy. (Set design by Jess Forga, lighting design by Ariel Pinkerton, costume design by Meghan Kent.)
The Bucket List of Booze Club is a great new play celebrating female friendship, brought to life by a mostly female cast and creative team. It's a comfortable, but also challenging (#bringtissues) club to hang out in for a couple hours. Continuing through May 14 at the Crane Theater in Northeast Minneapolis.