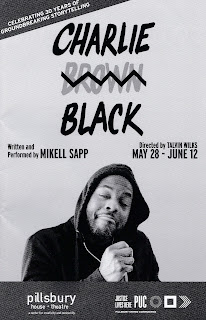 In his first solo show, #TCTheater artist Mikell Sapp tells the story of his life, career, and experience working in the local theater community. The 2015 Ivey's Emerging Artist has not had as smooth of a path as one might expect is granted to such an award-winner, which he talks about so openly and honestly. He's as funny and charming as he is vulnerable and heart-breaking, engaging and personable throughout it all. In just 90 minutes we learn so much more about this artist, who's been appearing on stages around the Twin Cities for 11 years, as he explores the ideas of grief, self-doubt, dating, family, perseverance, and what it's like to be a young Black actor working in theater today. See Charlie Brown Black through June 12 at Pillsbury House Theatre.

The title of the piece is drawn from one of Mikell's first acting experiences - he was the first Black Charlie Brown at his rural Alabama high school in You're a Good Man Charlie Brown. He goes back to the show several times in the piece, doing a few songs and monologues from it, turning it from a light and funny child's show to an existential crisis:

Trying not to rock the boat
Not to make a scene
A good man? Yes
But I confess
I don't know what they mean
I wanna rise like I should
And do everything right
But I lie awake at night...
With questions in my ear
I want to join the dance
But the answer isn't clear.

Mikell came to the Twin Cities to do Broke-Ology at Pillsbury in 2011, after a chance meeting with then-Artistic Director Faye Price. He talks about the transition from high school to college to the real world, from the warm South to cold and snowy Minnesota. He revisits the night when he won the Ivey (which also makes an appearance in the show), what he thought it meant, and what it did and didn't change in his career. He continued to find himself competing with other young Black actors for that one role in a show, and makes a compelling case for opening up the theater world and giving everyone a seat at the table, something that's been talked about a lot recently, especially in the two years since George Floyd was murdered just a few blocks from Pillsbury. Charlie Brown Black is one such show that gives voice to the Black experience, particularly in today's theater world.
Directed by Talvin Wilks, the show is well constructed, a nice balance of humor and more heavy topics. Mikell has an almost conversational style at times, really pulling the audience into his story. The stage is bare, other than a mic stand, music stand (with a script he occasionally referenced at the preview performance I attended), stool, and a large screen as backdrop. Videos, images, and photos appear on the screen, coloring his story with more emotion. Subtle changes in lighting and costume, as well as some cool sound effects, also provide interest and depth to the storytelling. (Set design by Christopher Heilman, lighting design by Merritt Rodriguez, sound design by John Acarregui, costume design by Amber Brown, video design by Kathy Maxwell.)
You've likely seen Mikell Sapp on stage, but you've never seen him like this - not playing a role, simply being himself, and revisiting some painful moments in his life. He bares his life story and his soul on stage, in such an open and vulnerable way, which a beautiful thing to witness. Charlie Brown Black continues through June 12 at Pillsbury House Theatre.