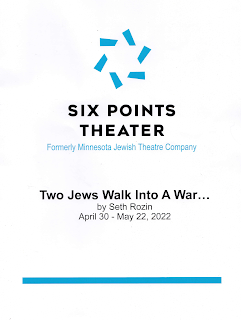 Two Jews walk into a war. No, that's not the set-up to a joke, it's the title of a play. But it is funny, as much as a play about the beleaguered nation of Afghanistan and the millennia-long story of the persecution of the Jews can be funny. Seth Rozin's play is a fictionalized account of the last two Jews in Kabul, who hated each other but were forced to work together. He uses the humor of this cantankerous relationship to delve into some pretty deep issues of faith, community, tradition, identity, and the meaning of home. See this sweet, funny, heart-breaking little play at Six Points Theater through May 22.

The play takes place in a bombed out synagogue in war-torn Kabul sometime before US withdrawal from Afghanistan. After the recent death of an elder, Zeblyan and Ishaq are the only Jews remaining to continue the tradition in this place. Why don't they just leave, as so many of their family and community have? That may be the smart choice, but they're reluctant to leave a place that once had a flourishing Jewish community, to leave one more place where Jews lived for a time and then were forced to leave. But staying means that they have to work together to rebuild their community under the threat of war and retaliation. They disagree (hilariously) on how to do it, but finally agree that they need a Torah, which Ishaq committed to memory before theirs was destroyed by the Taliban. Because his penmanship isn't what it used to be, Ishaq dictates the Torah to Zeblyan to write on a scroll of butcher paper, which leads to philosophical, religious, and scriptural discussions, much to Ishaq's annoyance. For Ishaq, the text is the text, but Zeblyan wants to know the meaning behind every word and phrase. Throughout this painful process, which continues over months and becomes the center of their existence, they find a reluctant friendship and kinship.

Sally Wingert ably directs this two-hander, nicely balancing the comedy and tragedy of the piece. And she couldn't have found two better hands than Avi Aharoni as Zeblyan and Nathan Keepers at Ishaq, who are individually funny and talented, and together make a brilliant pair. Nathan's Ishaq is the stern and traditional one to Avi's curious and open-minded Zeblyan, which is a great set-up for comedy. Their banter and comedic timing is on point, with moments of poignancy and vulnerability that really endear us to these two cranky old men. At one point their disagreement turns physical, resulting in a great comedic fight scene.

Every scene takes place in Michael Hoover's set with half destroyed walls, massive worn out doors, and the hint of a cityscape behind. Rick Polenek's prop design including books, crates, and the like in the corners of the room, and the all-important scroll that grows with every scene, along with the pile of crumpled discarded paper. Klezmer music plays during scene transitions, and the sound of gunfire and bombs continues throughout the play (sound design by Anita Kelling).

Two Jews Walk Into a War... continues through May 22, with many performances already sold out due to social distancing in their intimate theater space in the Highland Park Community Center. Call the box office for tickets.