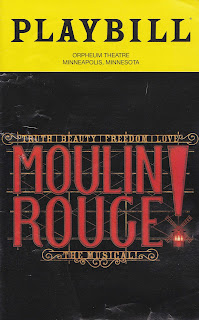 In general, I'm not a fan of movie-to-musical adaptations, but Baz Lurhmann's 2001 film Moulin Rouge! was crying out to be a stage musical. Everything about it is big, bold, and theatrical, and it cleverly weaves pop songs into the storytelling (it's one of my favorite movie soundtracks). The only surprising thing is that it took 18 years for it to get to Broadway, where it won ten Tony Awards in the covid-shortened 2020 season, including best musical. And now, three years later, it has finally arrived on Hennepin Avenue in Minneapolis for a three-week stay. It's a successful adaptation of the movie, staying very close to the storyline of the passionate but doomed love story, and the group of misfits trying to save their community from the rich and powerful Duke. Like the movie, the stage musical also cleverly weaves pop songs, from a single line to the whole song, into the storytelling. Most of the songs from the movie are still there, with some fun additions. Like it was on the screen, Moulin Rouge! on stage is big in every way - big emotions, big songs, big dance numbers, big hats, big set pieces - and the audience just laps it up. Visit the Moulin Rouge in Minneapolis now through June 5 (click here for the official ticket site).

If you're not familiar with the movie (where have you been living?), it's a sort of mash-up of Cabaret, RENT/La Boheme, and other extravagantly doomed love stories. The songwriter Christian (here from Ohio, which I'm fairly certain Ewan McGregor was not) falls in love with Satine, a performer at Paris' famed Moulin Rouge (which opened in 1889 and is still in operation). But the proprietor of the Moulin Rouge has promised her to a wealthy Duke in exchange for the money they need to save it. Lots of high drama ensues, until (spoiler alert), Satine dies of consumption, the beautiful movie disease. But Christian continues to tell their story, so they'll always be together.

Fans of the movie will likely be thrilled at the stage adaptation, which has all of the wild emotion and spectacle of the film, and makes us feel like we're right in it. And even if you don't know the movie, you might enjoy this show if you're looking for a big showy musical with tons of fun and familiar music and phenomenal dancing. There's not a lot of depth there, but it's a fun escape for a few hours.
The Broadway tour of Moulin Rouge! continues through June 5 at the Orpheum Theatre in downtown Minneapolis. Click here for information and tickets, which include $30 rush tickets for students and teachers.