"A Raisin in the Sun" at Guthrie Theater 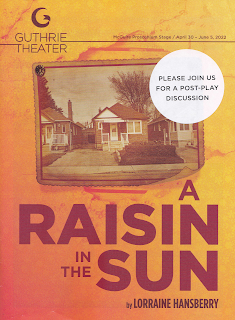 The American classic A Raisin in the Sun premiered in 1959, making Lorraine Hansberry the first female Black playwright on Broadway, but it's anything but dated. Unfortunately, racism, discrimination, and unjust practices like redlining are still very much a part of our world, as evidenced by the recent racist and anti-Semitic fueled mass shooting in Buffalo, and the fact that in Minnesota 77% of White families own their homes compared to only 26% of Black families. This is the legacy of the world Hansberry wrote about that we're still experiencing. The Guthrie's production of this ever-relevant piece is beautifully wrought, from the detailed set to the raw and emotional performances by the entire cast. You can see it now through June 5 on the Guthrie's proscenium stage.

The entire play takes place in the living room of the Younger family in a shabby but well cared for apartment on Chicago's South Side. Matriarch Lena lives there with her two adult children, after raising them there with her deceased husband Walter. The family includes brother Walter Lee, his wife Ruth and their son Travis, and sister Beneatha. They all have dreams, and the arrival of an insurance check worth $10,000 (almost $100,000 in today's money) has them all wanting to make their dreams come true, if they can only agree on whose dream to pursue. Lena wants her family to have a house they can call their own, with a garden where she can grow a plant or two, and a yard where Travis can play. Walter Lee wants to buy a liquor store so he can be his own boss and support his family. Beneatha wants to be a doctor (pretty impressive dreams for a young Black woman in the '50s), is discovering her African identity, and is torn between two suitors. This is a family that loves each other deeply; they all want what's best for the family, but can't agree on what that is. Further complications arise, including an unexpected pregnancy, a betrayal by a business partner, and most shockingly, the arrival of a white man named Mr. Lindner from the "neighborhood improvement society" who wants to buy them out to prevent a Black family from moving into the all-White neighborhood. How each family member reacts to these complications determines what kind of person they want to be and the future they will have.*

Director Austene Van, who also directed this play at Lyric Arts a few years ago, once again "brings out all of the humor, heart, and gravity of the piece." There's a lot happening in this play, a lot of characters with their own separate and related arcs, with swings of emotion from broad humor (primarily from Jamecia Bennett's scene-stealing moment as a nosy neighbor) to extreme drama and devastation, and it all flows smoothly and feels so real. That's also thanks to this excellent cast, with some familiar faces and some new faces. Every one of them gives a believable and fully formed performance, including Tonia Jackson as the wise, tough, and loving matriarch of the family; James T. Alfred displaying much power and vulnerability as Walter Lee; Anita Welch as his supportive yet frustrated wife; 6th grader Adolphe Magloire Jr (alternating with Joshavia Kawala) as the cutest member of the family, young Travis; Nubia Monks with youthful energy as Beneatha; Ernest Bentley as her charming African suitor Asagai; Chaundre Hall-Broomfield as suitor George, the one we love to hate; and Terry Hempleman embodying a really polite racist.In a play that's so much about home, the Younger's home is almost like another character. Regina Garcia's set feels like a real apartment lifted from 1950s Chicago and placed on the proscenium stage, neat and clean but well-worn, photos on all the walls, kitchen shelves and fridge full, beams and doors creating dimension and separate spaces. The set even extends beyond the apartment to the hallway with the shared bathroom door, and even a second story with the shadow of additional apartments. The '50s period costumes (designed by Samantha Fromm Haddow who also worked on the Lyric production) are really sharp and character defining, from Lena's housedresses, to Beneatha's smart pants, to George's super swanky suits. The world of the play is fully realized through all of the design elements, making it even easier to be immersed in that world.Conflicts in the play arise firstly from a generational divide. Lena tells her son that her generation was mostly concerned with not getting lynched, and can't understand why Walter Lee isn't satisfied with a steady job as a chauffeur, a place to live, and a family that loves him. But like any generation, Walter Lee wants more than what his parents had, and maybe doesn't fully comprehend the sacrifices they made for him. He wants to do more than serve the White man, he wants to have something of his own, to be a respected man in the world, to give his son a better life. He feels he can't do that living in a house his mother bought, of which she is still the boss. Eventually she sees that, and puts her trust in her son; everything she has done in her life has been to give her children a good life, and eventually she realizes she needs to let them live it, even if it's different than the life she envisioned for them.*

The other major conflict is, of course, a racial one. Walter Lee's need to be a respected member of his family and society echoes the sentiments of the modern-day Black Lives Matter movement. The White neighborhood's fear of "the other," of different people moving in and changing their neighborhood, is also a familiar conflict in today's fearful climate. A Raisin in the Sun lets us view today's problems through the lens of history, and see how much things have and have not changed, and how much they still need to continue to change.* I first saw this play in this very theater, a Penumbra production in 2009. I've seen it a few times since, and every time it's always relevant to what's happening in the world outside the theater. The richness of Lorrainne Hansberry's script and clearly drawn characters always resonate.

See this truly impeccable performance of a classic American story at the Guthrie Theater through June 5 (click here for info and tickets).

*Some text borrowed from what I've written about previous productions.