"The Labyrinth and the Minotaur: The Incarceration Play Project" by Wonderlust Productions at Mixed Blood Theatre 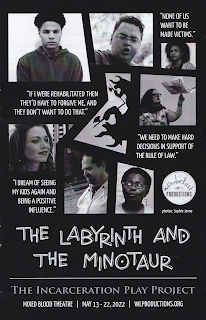 Four years in the making, Wonderlust Productions' newest piece The Labyrinth and the Minotaur: The Incarceration Play Project reimagines the myth of the Minotaur and the Labyrinth in which it is kept as the Minnesota Corrections system. For this project they collected  stories from over 230 people who live and work within this system, and the huge cast (perhaps the largest I've ever seen) includes many of these people, alongside seven professional actors. It's a really beautiful, inspiring, and thought-provoking piece about an incredibly relevant issue - this country's broken, cruel, and racist system of incarceration. This is a theater company dedicated to elevating the voices of the unheard, and there are few voices less heard than those of the incarcerated. Here they get to tell their own stories in an empowering and powerful way. Although the play is a bit too long (three hours and 15 minutes on opening night) and would benefit from some editing, it's very worthwhile and important. See it through May 22 at Mixed Blood Theatre; only five more performances remain.
You can read all about the mythical half bull/half beast creature called Minotaur here, and the program includes a brief helpful summary. The key thing to know for this piece is that King Minos of Crete imprisons the Minotaur in a labyrinth, and every year sends 14 Athenians into the labyrinth to feed the Minotaur. They never return, until Prince Theseus volunteers to enter the labyrinth, determined to slay the monster once and for all. In this version of the story, the labyrinth is the prison system, and the 14 are inmates, workers, and volunteers. But how do we decide who to send into the labyrinth, how are they treated when they're inside, and what support is in place for them when they come out again and return to society? All of these questions and more are explored through real life stories of the participants.
A storyteller, called the ombudsperson (Noelle Faye Pridgen), narrates the play and speaks to the audience as she guides us through the story scene by scene. We meet the 14 and follow them through their journey. Most of the cast is made up of people who are part of the incarceration community, and what they lack in theater experience and training they make up for in life experience, raw honesty, and passion. It's so obvious that this means a lot to them, and they're so invested in the storytelling, that it's really quite effective and moving. I was truly impressed by the skills of these novice actors. They're supported and guided by professional actors including Ian McCarthy as Prince Theseus, Ernest Briggs as his best friend Perry (Pirithious) who becomes a guard in the prison, and ensemble members Laurel Armstrong, Latanya Boone, Kevin Fanshaw, Megan Kim, and Payton J. Woodson (scarily embodying the beast in a massive mask-head designed by Manasari Kawahara).
Mixed Blood's stage (in the same proscenium configuration it's been for the last year) has been turned into a prison, with a brick wall and prison bars, a shabby chain-link fence courtyard off to one side. I'm not sure how this cast fits in the space, but they manage to, hanging out on the picnic table or sitting on the edge of the stage, filling up this world with reality. They're all dressed in a chic version of the prison jumpsuit in varying earth tones, some of them zhuzhed up to represent royalty or to reflect the character (scenic design by Zeb Hults, costume design by Andrea Gross). Original music is used a few times in the play to powerful effect, with lyrics written by the the Voices of Hope Choir from the Shakopee Women's Prison (composition by Becky Dale and Queen Drea).

Co-creator Leah Cooper (along with Alan Berks) warned us in the pre-show speech that this was a long play; the stories were so good they didn't want to cut anything out. But sometimes less is more, and this is one of those times. The piece would be better served by honing and focusing the stories. Asking audiences, especially in these post-covid-intermission times, to sit for 3+ hours is challenging to the point where it detracts from the work, at least it did for this audience member. I'm sure the show will tighten up during the run (this was their first performance and they missed a rehearsal or two due to a power outage), but on opening night it was very, well, loose.

But despite the fact that I was asked to stay awake, alert, and engaged way past my bedtime, I'm glad I was able to see this work. The main reason I do this is because I believe theater can change the world, and The Labyrinth and the Minotaur is a prime example of that. Giving voice to the voiceless, engendering empathy with some of the least privileged members of our society, shining light on a broken system that we as citizens have the power to change, through awareness, activism, volunteering, voting, and more. All while telling an engaging and entertaining story. I can't ask for much more than that from theater (other than a shorter runtime). Click here for details and to purchase pay-what-you-can tickets.