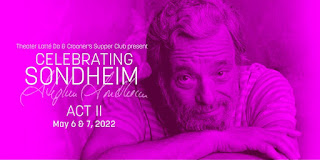 My favorite Sondheim interpreters, Theater Latte Da, return with Act II of their Celebrating Sondheim cabaret series at Crooners Supper Club. And the good news is - there are still some tickets remaining for today's two shows! Click on this link right now to snag one before they're gone, so that you too can experience this beautifully curated selection of songs from arguably our greatest music-theater creator.
Back in March, Theater Latte Da presented Act I of their two-part series, with curator/director Peter Rothstein introducing the show and sharing a little about what Stephen Sondheim, who died last November at the age of 91, means to him (you can read about that show and see the songlist here). Two months later, Peter once again took the stage to introduce an entirely new collection of songs performed by an entirely different cast of talented local performers. It feels like this could be an endless series; Sondheim's work and legacy is that rich and deep. But the good news is we're sure to be seeing a lot more of Sondheim next season. The Guthrie has already announced they'll be doing Into the Woods next summer, and Peter teased Latte Da's upcoming 25th season that will open with a to-be-announced Sondheim musical. My friend Carol from Minnesota Theater Love guessed Follies; make your own guess and stay tuned for the season announcement.
Frequent Latte Da music director Jason Hansen performs those duties for this show, as well as accompanying the cast on piano and sing a bit himself. The seven cast-members have all performed with Theater Latte Da before, some of them singing a song or two from roles they've performed. You can see the full list of 19 songs from 9 different shows below. Highlights include Kate Beahen's hilariously fast "(I'm Not) Getting Married Today" from Company juxtaposed with the poignant "Anyone Can Whistle;" Mark Benninghofen and Sally Wingert reprising their roles from Latte Da's 2015 production of Sweeney Todd and 2019 production of A Little Night Music, David Darrow's sweet "Not While I'm Around" from Sweeney Todd and outrageous "Buddy's Blues" from Follies; Bradley Greenwald's "Too Many Mornings" from Follies (from a role he performed in Artistry's 2018 production) as well as his adorable "Agony" duets with David; Rodolfo Nieto's somber "Gun Song" from Assassins; and Greta Oglesby reprising her role as the witch from Latte Da's 2015 production of Into the Woods.
It doesn't get much better than Theater Latte Da doing Sondheim. See it for yourself today only! Or see Latte Da's triumphant regional premiere of Jelly's Last Jam before it closes on May 14, and/or their world premiere of the musical adaptation of Twelve Angry Men in June.
Crooners is a busy place, with multiple concerts per day on their three stages, including their tented outdoor stage The Belvedere. Food and drink service is available before and during the shows. Check out the full schedule here, and see below for some upcoming theater-adjacent performances.
May 12: Erin Schwab and Jay Fuchs - The Music of Carole King and James Taylor
May 13: Jennifer Grimm sings Judy Garland (read my review of the show, which I was fortunate enough to see last year)
June 2: An Evening with Leslie Vincent
June 11: Songs from Broadway and More with Kate Beahen and Friends
June 19: Erin Schwab's Birthday Bash 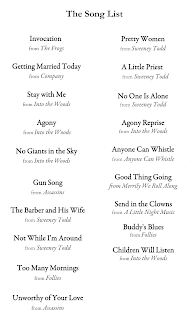