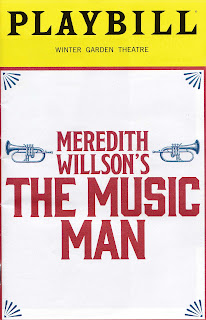 Summary: A big, beautiful, colorful, life-affirming, revitalizing, traditional (with a few tweaks) revival of the 1957 classic, only the second Broadway revival.
Highlights: I unabashedly love The Music Man, the story of a con man who "gets his foot caught in the door" on his way out of town, because someone saw through his slick veneer to his true self, and loved him anyway. He's not selling a band, he's selling hope, a common goal, community, and something to believe in. Marian is a woman with standards, and finally meets an intelligent man who meets them, and brings life back to her family and town. This production is a joyous celebration of all of that. And maybe it is corny and old-fashioned, but that's OK with me. This lovely, talented, diverse, and huge cast is such fun to watch, especially the young ones who are unbelievably confident and capable amongst the pros. Hugh Jackman is an absolute charmer, a spellbinder who has everyone in River City and the theater believing his every word, a twinkle in his eye that can be seen from the last row of the theater (or at least the 2nd to last where I was sitting). He has a great match in two-time Tony winner Sutton Foster, whose Marion doesn't suffer fools. She's tough and smart, and watching these two warm to each other and their easy natural chemistry is a joy. Meredith Wilson's beloved classic score sounds simply scrumptious as played by the 20+ piece orchestra tucked under the stage; I stayed to hear every last note. There are a couple of rewritten lyrics, most notably in "Shipoopi" to make it a little more palatable in the #metoo era, and a new (or old) intro to "My White Knight." The choreography (by Warren Carlye) is divine. "76 Trombones" is the highlight, absolutely stunning as each group of (mimed) instruments comes forward and takes turns, the groups of dancers weaving together and creating a beautiful symphony. The library scene is also a delight, as is the final tap number. As expected, costumes are luscious, overflowing with bustles and hats and flounces, and sets are genius, with a "curtain" made up of the red planks of a barn. It opens in various ways and rises into the ceiling, revealing two-dimensional backdrops and set pieces in the Grant Wood style (set and costumes designed by Santo Loquasto). This was my final show of the trip, and it left me on a high, marveling at the wonder and magic of theater. Everything about it is so wonderful, a balm to a world-weary soul. I had tears in my eyes throughout the show, at the beauty of the story and the storytelling, and remembering how long we had to live without it. Only one of the five shows I saw didn't have an understudy in a lead or featured role, but we're finding a way for the show to go on safely. Broadway is unquestionably back, and The Music Man represents that traditional musical that we love so much.

*Once again, I'm using an abbreviated Fringe-style summary for my NYC 2022 trip, since I am in the greatest city in the world with much more exciting things to do than write! Click here to see all of my Broadway-related blog posts.