NYC Theatre Trip 2022: "A Strange Loop" at the Lyceum Theatre 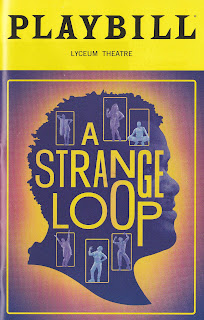 Summary: In the 2020 Pulitzer Prize winner for drama (just the tenth musical to do so), a queer black writer is writing a musical about a queer black writer writing a musical about a queer black writer writing a musical…
Highlights: This very meta theater play features a unique voice and a unique story that needs to be heard. Composer/lyricist/playwright Michael R. Jackson's "emotionally autobiographical" story features a self-described queer black fat boy, with an inner white girl, working as an usher at the Lion King while writing his show. As he's writing the show, he's discovering and living the hard truths he's writing about. Truths about his career (should he sell out and write a Tyler Perry gospel play, which would make his mom happy?), his family life, his love life (or lack thereof). In a clever storytelling device, his embodied thoughts help and hinder him along the way, representing those ugly little voices all of us have in our heads. It's a very specific story, with very graphic language and subject matter (my friend and I wondered what they could possibly sing on the Tony's), but with universal and relatable themes of family, identity, and finding ones place in the world. I saw an understudy in the lead role, Kyle Ramar Freeman, who did a beautiful job filling in for Tony nominated Jaquel Spivey, so endearing and sympathetic, with a great voice and stage presence. Six talented and hard-working actors play his "thoughts" and multiple other characters, dressed in chic neutral athleisure wear with added pieces to create characters. (Side note: #THTheater actor Jon-Michael Reese is an understudy for several of these roles and recently made his Broadway debut, much deserved!) The story takes place primarily on a simple set consisting of six open doors and a few set pieces, which are later removed to reveal the set of the much talked about and finally seen Tyler Perry gospel play (set design by Arnulfo Maldanado, costume design by Montana Levi Blanco). A Strange Loop may not appeal to the tourist crowd (that's OK, they have plenty of jukebox musicals and revivals to choose from), but it's an exciting and unique new musical that pushes the boundaries of what music-theater, and in particular Broadway musicals, can do and be and say.
*Once again, I'm using an abbreviated Fringe-style summary for my NYC 2022 trip, since I am in the greatest city in the world with much more exciting things to do than write! Click here to see all of my Broadway-related blog posts.