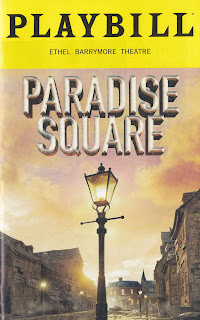 Summary: A new original musical (with ten Tony nominations) about Irish immigrants and free Black people living together in the Five Points neighborhood of NYC, until various factors including the draft riots of 1863 brought it to an end.
Highlights: This show reminded me a lot of Theater Latte Da's original musical Five Points, with similar themes, characters, setting, and dance styles. But while Latte Da's story centered around two historical dancers, Paradise Square is a fictional story about two Irish siblings married to free Black people and working together to run a pub called Paradise Square. Sister Annie (Chilina Kennedy) is married to Reverend Sam (Nathaniel Stampley), who works with the Underground Railroad to ferry escaped slaves to Canada, and brother Willie O'Brien (Matt Bogart) is married to Nelly (Tony nominated Joaquina Kalukango), who inherited the pub from her father. Things get even more complicated when Willie goes off to fight in the Civil War (easy to guess how that goes); the O'Briens' nephew Owen (Tony nominated A.J. Shively) arrives from Ireland needing work and a place to stay; the family takes in an escaped slave who takes the name Washington (Alan Wiggins beautifully filling in for the third Tony nominated actor in the cast, Sidney DuPont); politicians try to force Nellie out of her bar; and a draft is announced, causing unrest among the poor population who can't afford to pay the $300 fee to get out of it. The drama centers around a dance competition at the pub that will hopefully earn enough money to save it, with Owen and Washington competing to win the money and secure their freedom. There's a lot going on, perhaps too much, but this look into an early American multi-cultural society is interesting and inspiring, and the manipulation of the populace by businessmen and politicians once again reminds us that the more things change, the more they stay the same. Six people collaborated to write the music, book, and lyrics, pulling in many different voices to tell this story. Both the score and the choreography (by Bill T. Jones) combine the influence of Irish, African, and Black American traditions, and the dancing is truly phenomenal and thrilling, impeccably performed by the large and talented cast. How often do you see Irish step-dancing in a show that isn't Riverdance?! Lastly, the impressive set (designed by Allen Moyer) features a rotating two-story piece that represents the pub, inside and out, plus three narrow three-story pieces representing the tenement buildings. This epic and truly American story has a depressing ending, but "the door is always open to Paradise Square" provides a moment of hope.
*Once again, I'm using an abbreviated Fringe-style summary for my NYC 2022 trip, since I am in the greatest city in the world with much more exciting things to do than write! Click here to see all of my Broadway-related blog posts.