"Back to Workshop; Or, Everything's Fine!" at Brave New Workshop 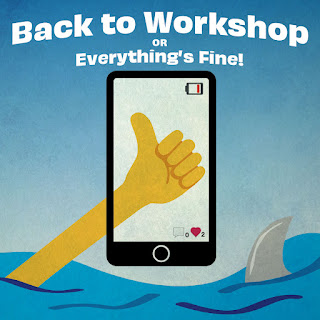 More than two years after they had to shut down due to a global pandemic (remember that?), Brave New Workshop, the longest running improv/sketch comedy troupe in the country, is finally back! Because everything's totally fine now, right?! In addition to everything we've all been through over the last two years, BNW also went through a transition; their founder Dudley Riggs died, and the company and theater space on Hennepin Avenue in downtown Minneapolis was bought by the Hennepin Theatre Trust, which also oversees the historic Hennepin Avenue theaters - Orpheum, State, and Pantages. The first show coming out of this new partnership, Back to Workshop; Or, Everything's Fine!, is business as usual for BNW. The business being hilariously funny, smart, and topical satire, and just all around silly comedy entertainment. If you're having a tough time transitioning to this new world (and who isn't?!), Back to Workshop will help you feel not so alone in that, and maybe even help you process things or look at them in a new light. But mostly, you'll just have a really great time. Workshop plays weekends (Fridays and Saturdays, plus some Thursdays) through August 6.Proving that art imitates life imitates art, they had to cancel the second weekend of performances due to covid amongst the cast. This highlights the sarcasm in the title - everything is so far from fine that you just have to laugh at it, and that's what this show does. The two-hour show features a series of sketches, written and performed by the cast (Lauren Anderson, Denzel Belin, Doug Neithercott, and Taj Ruler, who was out the weekend I saw the show, with her parts played by understudy Katie McEwan, Associate Artistic Director of BNW). The focus of most of the sketches is the weirdness of the time we're living in, and the things we've lived through in the last two years. They even summarize the events of the last two years in one sketch, which is really kind of mind-blowing when you think back to everything that's happened and what it felt like in the moment.

Artistic Director and director of the show Caleb McEwan introduces the show, and even plays a few roles in some of the sketches. The troupe uses comedy to delve into some serious issues. Denzel headlines a piece about what it's like to be Black in America today, and the epidemic of police violence against Black men and women, which turns into a laugh-until-you-cry moment. Doug talks about "Don't Say Gay," and how hurtful that is to gay kids. Other sketches are a little lighter, like a running "HR Re-Entry Interview" segment, with people revealing the weird things they've been into the last two years. Lauren talks about her obsession with her new trampoline and making deviled eggs, sitting down (which for some reason had me crying with laughter). Other sketches included a really creepy Paw Patrol fetish, the difficulties of re-entry to working in the office (no pants! pretending you're still on zoom!), a song honoring essential workers that turns a little ridiculous when they begin to question just what that means, and a gay (and lesbian) hype squad.

Speaking of songs, another pivotal cast member is Jon Pumper on keyboard, who seamlessly plays along with the sketches and adds another dimension to the show. He makes the sketches better and funnier, perhaps without the audience even realizing it, and he even gets to play a role or two. After the show the entire cast came back out to do a bit of improv based on audience suggestions, a fun and unexpected addition to the show that showcased this casts' quick and clever comedic skills.

It's a new era for Brave New Workshop, but the work of creating timely, relevant, silly, hilarious comedy hasn't changed. Although they did make a few references to the new ownership - Caleb warned us this was not Moulin Rouge!, and the cast did a few musical spoofs. Thanks to Hennepin Theatre Trust for continuing the legacy of Dudley Riggs and the Brave New Workshop. Comedy is such a great way to process emotions and experiences, and feel a bit of relief and release, and Back to Workshop is the perfect show for that. One thing we've learned over the last two years is that our comedians, actors, musicians, and other artists are absolutely essential to our happiness, mental and emotional health, and to our economy. I go to a lot of shows by myself (#thelifeofatheaterblogger) but this is the kind of show that's more fun with a group, so I recruited my blogger friends from Minnesota Theater Love and Bite Sized Beet, and a great time was had by all.