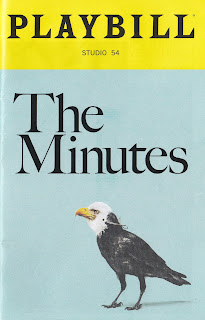 Summary: A small town city council meeting turns ugly when truths about the town's past are revealed, but not accepted by the people in power.
Highlights: Tracy Letts wrote and stars in this 90-minute very funny and real little play that you think is one thing, until it turns into another. The writing, direction (by Anna D. Shapiro), and performances by this fantastic cast (also including Jessie Mueller, Noah Reid of Schitt's Creek, Blair Brown, and scene stealer Austin Pendleton) are full of little details that define these specific characters and fill out the world in the town of Big Cherry, USA. Combined with a detailed and realistic set (designed by David Zinn), from the water stains on the ceiling, to the rolling snack cart, to the ambiguous mural, it feels like we're eavesdropping on a real meeting. The trouble arises when the newest council member returns from a week away, only to hear that something big happened last week resulting in one of the members being ousted from the council. The titular meeting minutes are not available, but he keeps digging until finally they're produced, revealing an argument about the annual heritage festival. The ousted member had produced the statement of an indigenous person that contradicts the local legend about the hero who saved the town from the "Sioux uprising" (which might sound familiar to those of us in Minnesotan, and really anywhere in the US). The mayor will not accept this, and goes to extreme lengths to make sure his version of history is the one that stands ("who lives, who dies, who tells your story"). What starts as an odd and funny little character study of a town and its residents (think Parks and Recreation) turns into a not so subtle statement about the true history of this country.
*Once again, I'm using an abbreviated Fringe-style summary for my NYC 2022 trip, since I am in the greatest city in the world with much more exciting things to do than write! Click here to see all of my Broadway-related blog posts.