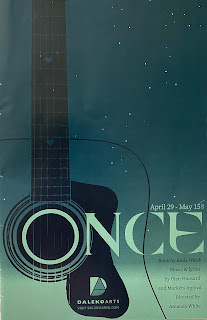 I finally made the gorgeous springtime drive out to New Prague to see DalekoArts' production of the 2012 Tony-winning musical Once in its sold-out final weekend. Just the second #TCTheater production*, Once is a perfect choice for the scrappy little theater in the far-out suburbs, the stage packed with singer/actor/musicians and the intimate house making it feel like we're all in a cozy Irish pub together enjoying some good craic. It's such a beautiful story, and a unique kind of musical that's really more of a play-with-music. All of the music in this Irish folk-rock score (by Glen Hansard and Marketa Irglova, who also starred in the 2007 movie from which the musical was adapted by Irish playwright Enda Walsh) is in context, in a pub or recording studio or music shop. The music is woven so naturally into the story that there's not a lot of applause during the show, not wanting to break the spell of the story being woven on stage. A multi-talented 12-person cast plus three band members embody this charming and bittersweet Once.

This is my fifth time writing about the musical Once, so I'm not going to tell you again about my love for the movie, Glen Hansard, and Ireland, or my thoughts on the adaptation (you can read all about that here). Although I will share this description of the plot from one of my past posts: "The story is simple and quiet - boy meets girl, boy fixes girl's Hoover, girl encourages boy to record his songs and follow his dreams, boy and girl go on with their separate lives, better for having met one another." It's an atypical love story about an Irish street musician and a young Czech woman who meet when both are at a crossroads in life, and help each other through to the other side. It's a story of connection, music, and community in which not a whole lot happens, except that everyone is changed.**

For the pivotal nameless lead roles, Daleko has wisely chosen Leslie Vincent and Chris Paulson. Leslie just is this serious but spirited young woman who wears her heart on her sleeve, and Chris is every bit the brooding Irishman with hidden depths. They have a chemistry that's almost as sweet as their vocals, both individually and when singing duets like the Oscar-winning song "Falling Slowly." Not to mention they also play instruments throughout the show (piano and guitar, respectively), and speak in accents, all seemingly effortlessly.

They're surrounded by a talented 10-person ensemble (Quinn Shadko, Grant Hooyer, Ryan J. Pierce, Eric Lee, Shana Eisenberg, Jeff A. Miller, Zachary Thomas Hedner, Shelby Lengyel, Shana Berg, and co-founder Ben Thietje as a last-minute replacement, script in hand, getting some of the biggest laughs as the bank manager). Everyone plays an instrument or five, just casually plucking a guitar off the wall and joining in on a song. Most of the cast is onstage for most of the show, sometimes just watching the action or having a conversation in the corner, creating a lived-in feeling for this world. Daleko's tiny stage is full of performers but it doesn't feel crowded or awkward, director Amanda White and choreographer Joe Crook keeping things moving smoothly and gracefully. The stage has been transformed into a very cozy and welcoming pub, a place where I'd like to pull up a stool and sit a while, with a fully stocked bar and every inch of wall space covered (scenic design by Robin McIntyre).

Music director Bradley Beahen also plays keyboard in the band, along with a fiddle and cello added to the ensemble-instrumentalists playing more guitars than I've ever seen on one stage, fiddle, mandolin, accordion, percussion, and more. It appears that only the two leads are miked, since they need to be heard over the full sound of the band, but it isn't obtrusive. The sound is well balanced and gorgeous in this intimate space, especially when the full cast joins in on stunning harmonies like in the song "Gold." Their pre-show concert might be more American than Irish (e.g., a singalong to "Brown-Eyed Girl"), but it's good fun and really draws in the crowd.

DalekoArts always makes interesting and unique choices (sadly their mid-season production of the "hilarious and heart-breaking" play Lone Star Sprits was cancelled due to covid), and the heart and high quality of their work always makes the 40- to 60-minute drive (depending on where in the metro area you begin) worth it, especially on a beautiful spring day with surrounding countryside bursting with the brightest greens you'll ever see. Once is right in their wheelhouse and this production did not disappoint, except perhaps in the too-short run and sold-out performances. I'll be watching for their 2022-2023 season announcement, and you should too.

I'll leave you with more words I've written about this show in the past, that still hold true.

Unlike what Hollywood and Broadway usually tell us, not everyone gets a happily ever after kind of love, and maybe that's not even the ideal kind of love to strive for. If we're lucky, we get an hour, or a day, or a week-long encounter with someone who changes our life and pushes us forward when we've become "stopped." Maybe that's what life is, a series of moments, encounters, relationships, that might not last a lifetime although their effects do. That's what this story is about, and that's what these two people do for each other. It's a perfect love story, even though it may not end in the way that we're taught to expect. And it's also a love story about Ireland and its rich and unique culture, that the girl describes as "speaking and singing of what it is to be human." She tells the guy that he has "heart and soul," and this unique music-theater creation has heart and soul in spades, and speaks and sings of what it is to be human, with all the heartbreak, joy, disappointment, passion, connection, difficulties, and wonder it entails.**

*Theater Latte Da brought us the regional premiere of Once in 2018, and Duluth Playhouse is opening their 2022-2023 season with Once this fall.

**Some text borrowed from what I've written about previous productions.