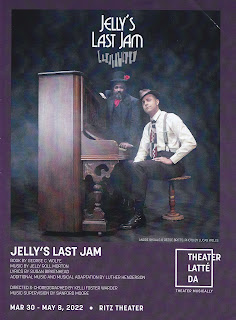 Thirty years after its Broadway debut, Theater Latte Da is bringing us the area premiere of Jelly's Last Jam, featuring the life and music of jazz pioneer Jelly Roll Morton. It's not an easy piece to do; it deals with a lot of tricky issues, includes uncomfortable language, and requires a specificity in casting. In the wrong hands it could be problematic, but fortunately Theater Latte Da has assembled a collection of all the right hands to bring this show to life. It's a true triumph, of acting, music, dance, production design, and social commentary. Music-theater fans, you don't want to miss this opportunity, because a show like this won't come around again soon. It continues through May 14, and I recommend getting your tickets soon (click here for more info).
The story begins at the death of Jelly Roll Morton, born Ferdinand Joseph LaMothe, in 1941. A sort of Ghost of Christmas Past, known as the Chimney Man, shows Jelly his life - the good, the bad, and the ugly. Jelly revisits his youth in New Orleans playing piano in clubs, his rejection by his Creole family for playing with Black musicians, his travels around the country making music, his music publishing career, and his struggles in his personal life. Some of it Jelly doesn't want to look at, but the Chimney Man won't let him look away. The piece deals with colorism within the Black community, with Jelly lashing out at those with darker skin tones when he feels hurt or threatened, a sort of defense mechanism, falling back on his Creole pride. Jelly isn't always the most likeable character; he's real and messy and relatable.
The story is told with Jelly's own music (with additional music and musical adaptation by Luther Henderson, and lyrics by Susan Birkenhead). It's a fantastic toe-tapping score that blends seamlessly into the storytelling and brings Jelly's world to vibrant life. While "the Roll" didn't "invent jazz" as he claimed, he was certainly instrumental in the formation of this truly American art form in the early 20th Century, and this musical beautifully tells his story in all its complexities. And through it, Jelly's Last Jam also tells us a bit about the history of the Black community, and specifically Black musicians and their contributions to American music.
The hardest working woman in #TCTheater, Kelli Foster Warder has done a fantastic job directing and choreographing the piece, navigating the tricky waters of tone as the story moves swiftly through time and place, and also creating some exciting, dynamic, and thrilling choreography. She's assembled a super talented cast of 11 performers of color, 10 of them making their Theater Latte Da debuts, including a star-making turn for Reese Britts as Jelly. He had a breakout year in 2019 with a number of scene-stealing supporting roles (so much so that I named him "one to watch"), but this is the first time I've seen him in a starring role, totally owning the stage. It feels like he was born to play this role - the vocals, the dancing, the charisma, the raw emotionality, he's got it all. It's truly a joy to go on Jelly's journey with him. Also great is Andre Shoals as the Chimney Man, a cool customer, bemused by his charge, but not charmed by him. Other highlights in the hard-working ensemble cast are Jordan Leggett as young Jelly, Alexcia Thompson as Jelly's love "Sweet Anita," Dwight Xavier Leslie as his pal Jack, and the fierce tapper Time Brickey (who also provided additional tap choreography).
The Ritz Theater stage has been turned into a jazz club, as the neon lights around the proscenium proclaim. Balconies on the multi-level set hint at Jelly's New Orleans roots, and a nifty 3-D silhouette of a piano allows for energetic faux-playing while not blocking the view. The terrific five-piece band sits onstage under the balcony, directed by Tommy Barbarella on piano, under the music supervision of Sanford Moore. The cast is dressed in fabulous period costumes with a black and white and jewel toned palette, Jelly in a purple suit with jackets that evolve with the story. (Scenic design by Eli Sherlock, costume design by Jarrod Barnes.)
Theater Latte Da often brings us familiar musicals with a new twist, but this time they're bringing us a rarely done musical, but still with the same thoughtfulness, specificity, clarity, and artistic talent as they bring to all of their work. Jelly's Last Jam is a thought-provoking, challenging, evocative piece, that's also a fantastically fun time. See it at the Ritz in Northeast Minneapolis through May 14, and you can also learn more about the musical in the return of Theater Latte Da's "Pin Spot Series," hosted by Max Wojtanowicz on April 11.