"The Tempest" at the Guthrie Theater 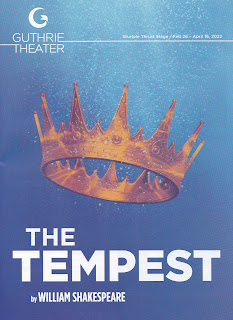 The Guthrie's production of Shakespeare's The Tempest, which opened last month and continues through April 16, is "such stuff as dreams are made on." Former Artistic Director Joe Dowling returns to the Guthrie to direct this piece, the first time since he left in 2015. I became a subscriber and fell in love with the Guthrie (and through it, the local theater community) during the Joe Dowling era, so this production feels very familiar and comforting to me, like going home. That big blue beautiful building on the Mississippi (which Joe Dowling shepherded into existence) truly is one of my happy places. And this Tempest is a joyful celebration of the magic we call theater, one that's especially heart-warming after the very long intermission of the last two years. This is the first fully new production of the Guthrie's 2021-2022 pandemic-shortened season (they hosted the touring production of What the Constitution Means to Me last fall, and put a new spin on their 40+ year annual tradition The Christmas Carol), and they've just announced an exciting new 60th anniversary season (my 19th as a subscriber). It feels so good to come home to the Guthrie again.
This is my third time seeing The Tempest, which is about when I really start to "get it." There's a lot going on here with many interrelated characters, but in short, we have a banished duke Prospera (a woman, one of several gender changes from the original, because guess what Bill, women can act now!), stuck on an island for 12 years with her daughter Miranda and their servant Caliban. Prospera has some magical powers, aided by the spirit Ariel, and uses them to cause a shipwreck that sees her enemies land on the island. Miranda falls in love, Prospera's enemies (including her brother, now the duke) plot more destruction, and a couple of fools have a good time. In the end, Prospera decides to forgive her enemies and free her servants. That's about as feel-good as Shakespeare gets. While not a laugh out loud comedy, this is definitely lighter than Shakespeare's tragedies.* The Guthrie's production is no sparse, stripped down, focused production, but an unhurried one that leans into the revelry of every scene. It feels reminiscent of so many Shakespearean comedies during the Joe Dowling era that were filled with music, dancing, playfulness, color, big showy moments, and quiet moments of poignancy.
Here are 10 reasons to see The Tempest at the Guthrie before it closes in a few weeks: