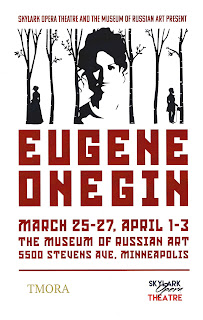 Once again, Skylark Opera Theatre brings us a classic opera in a stripped down, accessible, intimate way. They're performing the 19th Century Russian opera Eugene Onegin (pronounced oh-NYAY-gun) by Tchaikovsky, based on a novel in verse by Alexander Pushkin, at The Museum of Russian Art. In an audience of about 100 arranged along a long corridor stage area, surrounded by Russian art, listening to this unamplified nine-person cast (singing in English) accompanied only by a grand piano is a uniquely satisfying musical experience. Only four performances remain, click here for info and tickets.

Eugene Onegin tells the story of a love quadrangle gone wrong. Act I takes place on a country estate, with two very different sisters. Olga is happy, light-hearted, and in love with the boy next door, Lenski, whom her family always expected her to marry. Tatyana is sullen, morose, and finds herself desperately and tragically in love with Lenski's friend Eugene Onegin, who rejects her love when she confesses it in a secret letter. Bored and resentful, he decides to flirt with Olga at the ball, and she returns the flirtation in a playful way to make Lenski jealous. He doesn't take it well, and challenges his former best friend to a duel (the dumbest manifestation of the male ego, have we learned nothing from Hamilton?!). This is not a happily-ever-after kind of opera, and things do not end well for our love quadrangle, in fact things end in gorgeous tragedy and misery for all.

#TCTheater veteran Gary Briggle directs the production, focusing on the intimate relationships and conversations between the characters. Music Director Carson Rose Schneider plays this beautiful Tchaikovsky piece on a grand piano at one end of the long corridor. The talented cast (although unfortunately lacking in diversity) really couldn't sound better singing together in this space - unamplified in a small space is truly my favorite way to listen to any music, and Tchaikovsky's gorgeous melodies and harmonies just soar here. Benjamin Dutcher's Lenski is as sweet and pure of soul as he is of voice; Eric Smedsrud is a powerfully brooding Onegin, with a deep and resonant voice; and Melanie Ashkar's light and happy Olga is in stark contrast to Elena Stabile's Tatyana, the latter reaching great depths of emotion expressed through her lovely voice. Rounding out this cast that is much smaller in size than this opera usually calls for, but not small in voice, are Jim Ahrens, Emily Arachtingi, Robert H. Riordan, Colleen O'Schaughnessy, and KrisAnne Weiss, all playing multiple characters.The cast is dressed in costumes appropriate to the time and place (borrowed from Utah Symphony and Opera) - empire waist gowns, three-piece suits, plus coats and furry Russian hats for the outdoor scenes. Choreographer Heidi Spesard-Noble provides some quaint country dances for the balls. The cast moves up and down the corridor, coming in from various locations in the museum, walking behind the audience, and even singing from the upper balconies. This allows for great views from any location (although you might get a kink in your neck). A table, a few chairs, and a few period appropriate props (provided by John Novak), are all that's needed to help us imagine the world of the story.With Skylark Opera Theatre, you don't need to feel afraid or intimidated by opera. They make it accessible by stripping it down to the emotions of the story, performing it in English, and in an intimate and story-appropriate setting that effortlessly draws you in. Eugene Onegin continues at The Museum of Russian Art (parts of which are open to explore before the show and during intermission) through April 3.