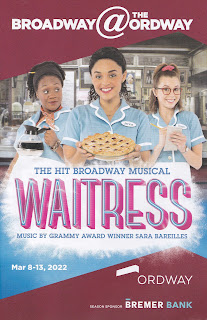 The 2016 Best Musical Tony nominee Waitress is back in the Twin Cities! Last seen in 2017, the tour is coming back around again, and it's better than ever. The quirky little 2007 movie of the same name upon which it was based (written by and co-starring Adrienne Shelly, who was tragically murdered before its release) is one of my favorites, and the musical adaptation retains the sad and joyful sweetness of this story of a woman gaining control over her own life. Singer-songwriter Sara Bareilles wrote the Tony-nominated score, and it's a great one, with a more folky stripped-down sound than is normally heard on Broadway. This show gives me all the feels - it's sad, and funny, and hopeful, and inspiring. But it's playing at the Ordway Center for the Performing Arts until Sunday only, so don't wait! (Click here for info and tickets.)
Waitress tells the charming, funny, sweet, and sad story of waitress and pie-maker Jenna. She's trapped in her life - by poverty, a controlling and abusive husband, and no options. Her solace is baking pies at Joe's Pie Diner with friends Dawn and Becky (as much as anything else, this is a story of female friendship). When she finds herself unexpectedly pregnant, Jenna doesn't have much hope for her future or her child. She hides money around the house, and dreams of entering a pie contest, hoping to be able to leave Earl someday (is it a coincidence that Jenna's abusive husband shares the same name as the abusive husband in the Dixie Chicks' empowerment anthem "Goodbye Earl?"). But Earl finds out, and won't let her leave (the musical cleverly turns what could be a romantic song, "Til the sun don't shine, you will still be mine," into a threat, a cage, a trap). Jenna also begins to find solace in her relationship with her doctor as they begin a secret affair. Eventually Jenna gains the courage to start her life anew, thanks to her friends, an affair with this man who is kind to her, and her new baby Lulu.*
This touring cast is fantastic, full of energy and emotion. Jisel Soleil Ayon is a wonderful Jenna, with a gorgeous voice that displays both incredible vocal control, and moving emotionality. Dominique Kent and Gabriella Marzetta are both fantastic as Jenna's always supportive friends Becky and Dawn (who also get their own love stories). Shawn W. Smith is quietly menacing as Earl, and David Socolar is a charmingly awkward Dr. Pomatter. The hard-working and talented ensemble are ever-present, singing and dancing back-up, drinking coffee at the diner, and filling out the world of this small town. I love the staging of the piece (original direction by Diane Paulus, original choreography by Lorin Latarro), which has the six-person band onstage for the entire show, with band members hanging out in booths between songs, or coming forward with their instrument to participate in a scene. Scene transitions are smooth as butter (sorry, I couldn't resist), with some subtle and beautiful movement (that often includes diner props) by the ensemble that adds to the storytelling.
Sara Bareilles has written a clever and catchy score, with interesting melodies, humorous and/or poignant lyrics, and some gorgeous harmonies, particularly for the trio of Jenna, Becky, and Dawn. It's more of a folky/retro sound than you might typically hear on Broadway, with just a six-person band, and includes soaring ballads (the show-stopper "She Used to be Mine"), funny little ditties ("Club Knocked Up" and "Never Ever Getting Rid of Me"), and lovely duets ("You Matter to Me").*
The scenic design is also lovely and beautifully represents the small town Americana feel, with a backdrop of open skies and cute and kitschy set pieces that roll in and out for the diner, clinic, and home scenes (scenic design by Scott Pask). They also have real baking ingredients on stage, or what looks real from the mezzanine. Sugar, butter, and flour flow freely and are part of the choreography.* With all of Jenna's creative and delicious pie flavors, this show will leave you craving pie, and the Ordway missed out by not selling pie at concessions (although they do have some fun themed drinks).
Waitress is not your typical Broadway musical, which is always a good thing in my book. The stripped down sound, the atypical love story that doesn't end in "happily ever after," the focus on female friendship (not to mention an almost entirely female creative team), and the beautiful ordinariness of the story. This large theater staging is very successful, and I also look forward to when Waitress is available for regional production, and we can see one of our local companies make the story even more intimate and real.
While the weather is still cold and dark and Minnesota, head to the Ordway for the warmth of this story, and then have some pie (a wonderful way to celebrate the upcoming pi day!).
*Some text borrowed from my review of the 2017 tour.