Broadway Tour of "Hadestown" at the Orpheum Theatre 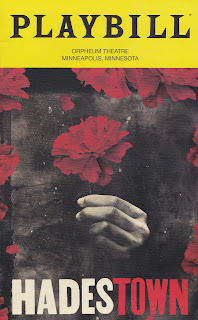 It's an old song. It's a sad song. But we sing it anyway. Such is the song of Hadestown, the 2019 Tony winning best musical that's finally made its way to Minneapolis, just in time for spring. The sad old song being sung again and again is that of Hades and Persephone, whose relationship is responsible for the changing of the seasons (according to Greek mythology), as well as Eurydice and Orpheus' tragic love story. Singer/songwriter Anaïs Mitchell turned this sad old song into a song cycle, a folk opera which she first recorded with some of her folk singer friends in 2010 (which I heard her perform at the loveliest little folk festival in Minnesota, Storyhill Fest). It took almost a decade to turn that song cycle into a Broadway musical, with help from visionary director Rachel Chavkin. The result is this stunning piece of music-theater that's wholly unique and original. I was lucky enough to see it on Broadway, and am thrilled that the tour is finally here! Truly, friends, don't miss your brief chance to see it at the Orpheum Theatre before the song moves on (click here for info and tickets).Our version of this sad old song is told by Hermes, the winged messenger of the gods. Here he appears as a sweet singing, three piece suit wearing man who introduces all of the characters in our story: Hades, the lord of the Underworld, known here as Hadestown, a sort of industrial factory; his bride Persephone, who leaves him once a year to return to the world and bring the spring; Orpheus, an idealistic poet and songwriter; and Eurydice, a hungry drifter. Orpheus and Eurydice fall in love, as the story goes, and when she goes to Hadestown to work for Hades in order to provide for them, Orpheus follows and tries to bring her home. But we know how that story goes, and no matter how much we wish it could turn out differently, the sad ending comes. But that doesn't stop this troupe from telling it again and again, because the beauty is in the telling. I've never know anything so desperately sad, and so radiantly hopeful at the same time.The original Broadway cast gave iconic performances (and still do, most of them are still in the show, three years since opening but with a very long intermission), difficult shoes to fill. But this touring cast does so brilliantly while putting their own flavor on the characters. Broadway legend André de Shields won a Tony for originating the role of Hermes. What I love about this tour is that instead of casting the role with an André de Shields type (a trap so many touring productions fall into), they went another direction with Levi Kreis, who brings a unique flair to the role, smooth voiced and charming (giving off some Harry Connick, Jr. vibes). On opening night both Orpheus and Eurydice were played by understudies, and as usual when that happens, Chibueze Ihuoma and Sydney Parra gave such fantastic performances it's hard to believe they don't do it every night. With a deep and seductive voice, Kevyn Morrow (who starred in the Guthrie's production of The Lion in Winter about five years ago) makes a compelling Hades, and Kimberly Marable gives a spirted performance as his Persephone. A gorgeous feature of this score is the three part harmonies employed by the ever present Fates, beautifully embodied by Belén Moyano, Bex Odorisio, and Shea Renne. Last but not least, "the hardest working chorus in the gods' almighty world" - Will Mann, Jamari Johnson Williams, Ian Coulter-Buford, Alex Lugo, and Eddie Noel Rodriguez (the latter three swings), providing backup singing, dancing, and character. One of the great things about this show is that each member of the cast and band gets introduced, and each is treated as an individual with unique talents that they get to show off.Anaïs Mitchell's Tony winning score (only the second woman to win this award solo, after Cyndi Lauper) has such a unique sound for Broadway - folk, blues, New Orleans jazz. It's performed by an incredible seven-piece onstage band - piano, percussion, guitar, strings, and trombone (Audrey Ochoa, who nearly stole the show). Anaïs' songs are so soulful and emotional, both musically and lyrically, and this touring cast does them justice. Flowing with the constant music, the choreography and movement (by David Neumann) is cool, modern, and urgent. 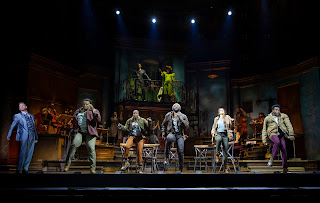 Everything about the production design of this show is so thoughtful and consistent in creating this dark but hopeful world. The multilevel set has the band place on either side, with Hades peering out from a New Orleans style balcony in the center, while rotating concentric circles on the floor create movement. The lighting design creates some breathtaking moments, with bright headlamps shining out into the audience, swinging lamp lights, and other impressive tricks that don't overpower the story but rather add impact. Costumes are a modern grungy chic, with colorful earthy wear for Persephone (I love her ombre fur coat), elegant gray ragged dresses for the Fates, and sleek suits for Hermes and Hades.

Despite being based on such an ancient story, Hadestown has so many relevant and timely themes. But maybe that's not surprising; the reason these old stories are still with us is that they speak to the very nature of being human. Poverty, the working class, despotic rulers, love and grief, the desire to survive and thrive as humans. A beautiful story, brilliantly told, and a unique Broadway musical very deserving of its status as reigning Tony winner (I don't count 2020 because that was a pandemic-abridged season).

A few tickets remain for this week's performances of Hadestown in Minneapolis, go if you can (click here for tickets).