"Once Upon a Winter Night" at Open Eye Theatre 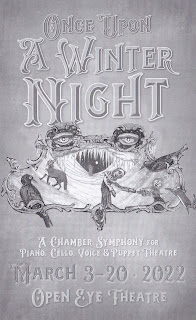 Open Eye (née Figure) Theatre's new original work Once Upon a Winter Night was postponed from January to March, which often marks the beginning of spring. But never fear, this is Minnesota, so we're still in the throes of Winter. I attended the show after a matinee at the nearby Children's Theatre, and when I left the theater and saw the slush falling from the sky and filling up the streets and sidewalks, I almost drove home. But since I was there, I decided to stay, and sloshed through the puddles into the cozy and intimate space at Open Eye for a mesmerizing magical show. It turned out OK because it was still just raining when I drove home, with everything freezing and being covered by a couple inches of snow by the morning. Which just reinforces what we who live in the frozen North know - Winter is a mysterious, magical, at times menacing thing that we just try to survive every year. But there's a lot of fun and celebration to be had in Winter too, and that's what Once Upon a Winter Night is.
The show is billed as "a fairytale for grown-ups," and that's exactly what it is. It's full of magic and wonder, but like any good fairytale, it also contains darkness and danger. The story is told mostly without words, except for the two crows on either side of the snow-globe-like window into this world, who cackle, commentate, and crack jokes and bad puns like Statler and Waldorf. Winter is represented as a female spirit called Sister Winter, and our heroine is a girl in a red scarf traipsing across the frozen wilderness, at times following or being chased by a mischievous arctic fox. Will she make it through, or will Sister Winter win and suck all the warmth and life out of her?
Conceived and directed by Open Eye co-founder Michael Sommers, it's the manner of storytelling that creates the magic in this story, not so much the plot. The story is told through all forms of puppetry - shadow puppets seen in the snow globe, or on the circle at the back of the stage when the snow globe opens up to reveal snowy hills behind it; as well as physical puppets that range from tiny delicate things to massive pieces that fill up the space. The main characters (Sister Winter, the girl, and the fox) all have multiple puppet versions of varying sizes, creating a sense of perspective. Performers Kallie Melvin, Dylan Rickard, and Noah Sommers Haas manipulate and voice the puppets, like an intricately choreographed dance. It really does make you feel like a child again to see these amazingly animated puppets come to life (puppet design by Noah Sommers Haas and Michael Sommers, scenic design by Michael Sommers).
Another key element of storytelling is music, with an original score composed and performed on the piano by Eric Jensen, with Alma Engebretson on cello. The haunting soundscape helps create the world of the story, and also includes songs gorgeously sung by Lizz Windnagel as Sister Winter. Lighting design by Bill Healey ties everything together with a play of shadow and light.
The weather forecast tells us that winter is not going away anytime soon, so why not celebrate it with this magical creation? Escape from the drudgery of real winter to this fantastical Once Upon a Winter Night for 50 minutes, and dream of spring.