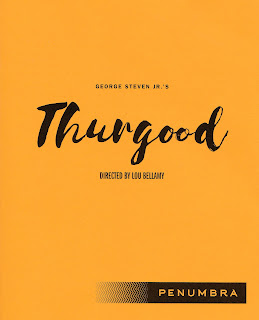 Friends, if you want to be reminded of the promise of America, and have a little hope restored that this promise will one day be fulfilled, go see Thurgood at Penumbra Theatre. And you're in luck - after selling out the initial planned run (at limited capacity), they've it extended through April 10. This solo play is such an inspiring look at the icon and the human that was lawyer, activist, and Supreme Court Justice Thurgood Marshall, and what an important role he played in the continued fight for Civil Rights. Though it seems like we've taken a few steps back in that regard lately, with new voter suppression laws and increased hate crimes and violence against Black Americans, and other communities of color, this play reminds us what is possible. And with the recent nomination of Ketanji Brown Jackson to the Supreme Court, who would be the first Black female Justice, it couldn't be more timely.
The play takes place at Thurgood's alma mater Howard University upon his retirement from the Supreme Court in 1991 at the age of 83. He tells the story of his life, growing up in Baltimore, being unable to attend the law school he wanted to because they did not allow black students, becoming a lawyer and fighting for Civil Rights through many court cases (his most personally meaningful being a voting rights case in Texas, Brown v. Board of Education, and winning a case against the law school to which he was denied entry), joining the staff of the NAACP, and eventually being appointed to the Supreme Court. It's inspirational to hear all of this man's accomplishments and the impact he had on Civil Rights and the legal system. But this isn't a dry lecture; you see Thurgood as a person instead of just an icon. He relays his grief at his first wife's death, and his joy at finally having children. He tells a few jokes and funny stories, as well as some truly scary ones about traveling the country to remote areas to argue cases.* It's a full picture of the human behind the now legendary figure.
Longtime Penumbra company member Lester Purry returns to play Thurgood (after playing the role in this production staged in Rochester, NY and Portland, OR), and he's magnificent. He walks onstage with the gate of a weary but determined octogenarian, using a cane and struggling to stand up at times. But when his story begins, he sheds the cane and is transported back to his youth, and Lester bounds across the stage with great energy. He portrays Thurgood with a wink in his eye, as he delivers most of his lines directly to the audience, delightedly responding to their feedback. Under the direction of Penumbra founder Lou Bellamy, Lester strikes a nice balance between lighthearted storytelling, and the powerful oration of a lawyer.
Lester could perform this play on an empty stage with no production elements and it would be inspiring, but he doesn't, and all of the detailed and thoughtful production elements add to the emotionality of the experience. Simple set pieces of sturdy table, podium, chairs, and American flag set the scene. Thurgood's briefcase, from which he pulls legal files, and a water pitcher and glasses on a silver tray are used to great effect. The preamble to the Constitution is displayed on the back wall, upon which images and video of the time and events discussed are portrayed, helping to transport us there. The sound design doesn't overpower the story, but adds subtle cues that heighten the emotion of certain moments, as does the lighting design. With wig, glasses, a smart three-piece suit, and a Justice robe, Lester is transformed into our image of Thurgood. (Scenic and prop design by Vicki Smith, lighting design by Don Darnutzer, sound design by Justin Ellington, projection design by Rasean Davonté Johnson, and costume design by Casey McNamara.)
This is such a pivotal time in our country to remember our history, remember the people who worked tirelessly to make America live up to its promise, so that we can continue their legacy. This play, so beautifully realized by the team at Penumbra, reminds us of the inspiring life story of Thurgood Marshall in a very real, engaging, and entertaining way.
The play ends fittingly with Thurgood's friend Langston Hughes' poem "Let America Be America Again:"

O, let America be America again—
The land that never has been yet—
And yet must be—the land where every man is free.
The land that’s mine—the poor man’s, Indian’s, Negro’s, ME—
Who made America,
Whose sweat and blood, whose faith and pain,
Whose hand at the foundry, whose plow in the rain,
Must bring back our mighty dream again.
Sure, call me any ugly name you choose—
The steel of freedom does not stain.
From those who live like leeches on the people’s lives,
We must take back our land again,
America!

*Plot summary borrowed from my review of Illusion Theater's 2015 production.